Thailand, the one country in Asia that has never been colonized by European people. Thailand is the one of an exotic country that has many cultures like another country in Asia. We can see the one exotic culture of Thailand when the traditional wedding took place.

As in Indonesia, weddings in Thailand also implemented based on the religious rules of the prospective bride. Buddha is the biggest religion in Thailand, there are two flows of Buddha that Thai people followed, buddha Theravada and Buddha Thai. Beside Buddha, there is also Thai Muslim and Christian Thai that implemented the wedding based on their religions. Islam (Muslim) is the second biggest religion in Thailand. Because the reasons, here we will talk about the traditional wedding in Thailand in Buddha and Islam.

Process of Traditional Wedding in Thailand

As other Asian countries, Thailand has unique wedding traditions in every step of rituals. All of the rituals that implemented in wedding symbolized the deep meaning and value philosophies as the pray for the couple's wedding. 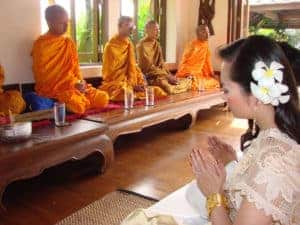 The Buddist monk decides the best date of thong mun (dowry) based on the born day of the couple. The Buddhist monk is usually considered as the wise person. The groom and the bride in Thailand generally not register their wedding in civil notes. For us, the wedding in Buddist tradition is more and more important that make civil notes for their wedding.

The luxurious goods that the groom was given are not showing about the materialistic. It is only as a guarantee if the parents let the bride in the price hand of man. It is the responsibilities of the parents to let the bride (daughter) before go out from their house. The thong mun or dowry returns to the couple after the wedding ceremony.

On the Thailand Wedding Traditions 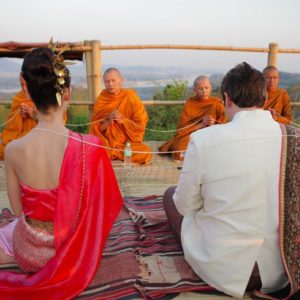 The bride and the groom in the time of the wedding put the bunch of flowers on their head that tied together. In this session, the bride and groom kneel to get the blessing from their family, the parents, and the elders. The palm hands of the groom and bride are tight together then the parents and the elders pour the water into their hand. They usually used the oyster as the jar of water, in Thailand, the ritual of tradition is called rod nam sang (rod is poured, nam is oyster). Sometimes, the Buddist monks are invited to read the buddha holy book (the Pali holy book). The Buddist monks for the last time are rarely invited because if the Buddist monks organize the funeral ceremony on the same day, they also come to the wedding, it is signed for the bad future of the bride and groom family.

For the Islam (Moslem), the thong mun (dowry) usually follows the Thai traditions. Slightly different, with the wedding rituals of Buddha, in the wedding rituals of Islam are celebrated in the mosque. The groom, father of the groom and bride, the male families of the bride and groom, well-known person or wise person (in civil society) sit together with the imam (Islam monk) in one circle. The bride, the mother of groom and bride, the female families of the bride and groom sit together in the different place with the males. The female of the Islamic Thailand wedding rituals has not participated directly.

2. Reception of the Traditional Wedding 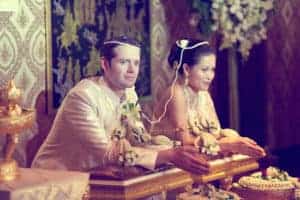 For the food in the wedding traditional in Thailand reception, the Thai bride usually serves the guest with the traditional or international food. The reception of Thailand traditional wedding is a free celebration. There are differences with the buddha (Buddist) and Islam (Moslem), for the Buddist, they serve pork for the invited people, different with the Islam (Moslem) they serve meat or halal food.

You may also read: Signs You Are Falling in Love

Religious rituals are important to get the God's blessing in future life family.

However, the modern era comes to lifestyle, but there are some traditions that usually done by the cultural (civilized) people to celebrate the moment of life, such as a wedding, born day and demise day. The habits to do the moment life traditionally makes the culture or traditions of the society.

Feels proud of the culture is the most important that remember us to be grateful. Do traditional wedding in Thailand traditions is the one way to appreciate the culture of ours. Thailand is the culture country with the exotic landscape and traditional culture. In case you ever heard, always spread love on every corner.

You May Also Like
Basic Things to Know Before Marrying a Muslim
No Comments
What Happens After Marriage That People Stop Loving The Way They Used To?
No Comments
14 Most Unique Marriage Proposal Ideas
No Comments