In Indonesia, especially marriage is not only a union between two people but also the union between two families. It is the reason why in marriages traditionally done in Indonesia is always talked about by two big families. Two big families will begin discussions about marriage even before the decision about the date or wedding day ceremony (wedding) of the bride and groom. Men usually advance to apply proposal than women. Indeed, here is the things you need to know about traditional wedding in Indonesia:

You may also read: How to Propose Someone

The meeting between two families that called as a formal proposal (in Indonesia), usually presented by parents and main family both of you and your prospective bride (girlfriend) in your prospective bride (girlfriend) house. In this agenda, your parents and your main family will bring gifts (Seserahan) for your girlfriend. Generally, the contains of gifts (Seserahan) in Indonesia traditional wedding are:

The exchange of engagement rings between you as the prospective groom and the prospective bride is also done on the formal proposal (Seserahan) agenda. In here agenda, for some traditions, as a symbol of an insurance that guarantee the groom will take good care of the bride after marriage, the groom presents a bowl filled with rice to the bride. The decision of the marriage ceremony (wedding day) also is decided in this time (Seserahan).

After the complicated and those long processes, the traditional wedding in Indonesia day process can be explained step by step here: 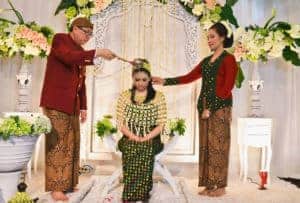 The Traditional wedding in Indonesia. This is the process that will do by the bride and groom before the wedding day. The purpose of the siraman (take a bath) tradition is to clean the bride’s and groom’s body as well as their souls. This is the important traditions to get purity before the next step, progress, and new life, marriage life.

After the siraman (take a bath), the bride comes to the wedding room. In the wedding room, the bride’s usually get the beauty treatment. For example, from the Java traditional wedding, the bride’s hair is smoked the perfumed powder (ratus). The bride’s hair combed and tied up in a bun strongly (gelung). Not only the bride’s hair that gets the touch, the bride’s face and neck are also cleaned then the makeup by the Pemaes is put on. Kebaya and batik jarik (long fabric) is the traditional women’s clothes that wore by the bride. The kebaya and batik jarik (long fabric) have indicated the prosperous life. The little different treatment can be found in each tribe and areas. But, for the main rituals are generally the same. 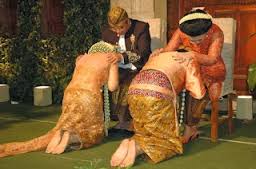 The story of this tradition from the story of Widodari. Widodari is the goddess that comes from the heaven and the women that want to marry and do midodareni at night will get the visit from the goddess, widodari. The light of the goddess will give to the bride. It reasons why the midodareni is also important tradition for the wedding, especially for the bride. The bride will become as beautiful as a goddess based on the ancient belief.

In each tribe has the different name for this tradition such as “mappaci” and “bepacar” but there are no big different rituals, generally they are same. This is the tradition to beautify the bride.

The coming of the groom’s to the bride’s house is a sign to start the midodareni night. The bride will be secluded in this traditions. The bride and the groom are forbidden to meet each other. The bride only gets permission to stay in her room and forbidden to get out from her room.

The four point advice of catur wedha are:

The close of the traditions is signed by the accepted from two families to let their daughter and son to life together in marriage life. The bride and the groom have to have steady heart and confident to be together in their future life.

This is the time to exchange vow between bride and groom based on their religion. This is the most sacred traditions because of the bride and groom promise to live together in the presence of God. The dowry is mentioned in this part of wedding agenda.

Before promise each other in the presence of God, the priest will give the sermon from the bible messages for the bride and groom. The bride and groom have to listen and muse the marriage messages as the provisions to face with their future life.

The tradition of the calling feels more valuable because the bride and groom have been able to meet today with the legal status. The ceremony of respect with bowing or prostration with parents is one of the sequences of the panggih traditions. 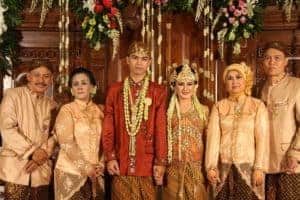 In this time, the bride and the groom sit on the stage to stay for the several hours to meet with the invited guests. How many guests are invited and how many glamour events at the reception will show how high the social status of the two brides in social society.

The wedding day is also as the time to do interaction or is social with families, friends, colleagues and the people surround both the bride and groom.

Although we can see the social status of the people from the ceremony (that they do) but we can not judge the people only from their ceremony because nowadays many people do not want to celebrate their ceremony glamor. The steps traditional wedding Indonesia that have specific meanings are more valuable than social status.

You May Also Like
Creative Ways How to Tell Your Husband You're Pregnant with Baby No. 4
No Comments
Dangerous Signs You'll Regret Marrying Your Partner
No Comments
7 Brilliant Reasons Why You Should Marry A Seaman
No Comments