9 Steps of Engagement Tradition in Indonesia - Customs and Etiquette

During the engagement ceremony, the groom's family will visits the bride's home to formally ask for her hand in marriage to her parents. It is totally different compared to western countries, western people engagement is way more simple than Indonesian Engagement.

In west country the guy asks the girl and brought the engagement ring for the girl. Even different ethnic groups in this country a.k.a Indonesia will have their own rules or sets of traditional wedding customs, and most of them start with the engagement ceremony. Lately, most couples don’t remember the more complicated and sacred rituals and instead go for a simple engagement ceremony that I have already list bellow.

1. The visit from groom's family

After the groom’s family and the bride’s family are blend in, the next procession starts by the MC that appointed by the bride’s family.
The host or MC will greets and thanks everyone for their presence in this engagement ceremony, usually also followed by a prayer to ask blessing from God. The host or MC will then explain the rundown of the engagement event. And after this the host or MC usually also telling a short story about the groom and the bride and then the host will formally asks the intention of the groom's family's for the visit that day.

After the opening, part of the family from the groom's side will answer that their intention for this event is to propose the bride. The speaker then ask the bride is she willing to marry the groom or not but usually the bride will say yes.

4. The bride's family will answers

5. Presenting seserahan or gifts to the bride's family

After the bride’s family accept the proposal, the groom’s family will present gifts called ‘seserahan to the bride. The gifts symbolize to the groom. The gifts has meaning that the groom's serious intention in proposing to the bride. Based on a agreement between the groom and bride’s family, the gifts usually range from bride's daily necessities needs such a clothes, make ups and sometime foods as well.

Then the next ceremony would be the introduction session, both brode’s family and groom’s family will introduce theirself to each other. And usually started with the groom’s family then followed by the bride’s family. At this session usually the atmosphere is not as formal as in the beginning.

8. The ending of the engagement ceremony

Since all the ceremonies already done, usually it will be closed by prayer, to thanks god because the engagement ceremony run smoothly. Since the host already lead the prayer, this has meaning that the ceremony already done, the next event usually both family takes picture together.

9. Lunch or dinner together

After finished taking pictures of both family, the bride’s family will invite the groom’s family and the guests to have lunch or dinner together. This sessions also allowing the guests have casual chat with each other in more non formal way.

Unique and Traditional Engagement in Indonesia

We will give you few example of unique engagement tradition in Indonesia from another ethnic: 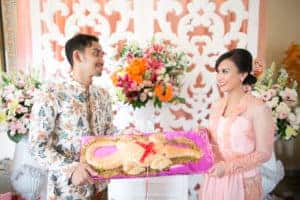 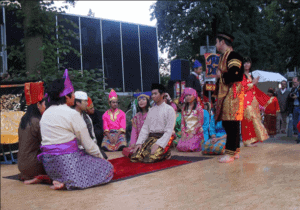 Also read: How to Propose Someone 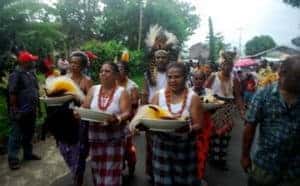 Engagement is really important in Papua, and the engagement tradition in Papua is really unique and different compared to other region in Indonesia. There are two kinds of engagement tradition in Papua, first is happen when both couple are really young (more or less around 12 years old), the boy’s parents would visit and ask to the girl’s parents, this tradition called ‘Sanepan’. Then second called ‘Fakfuken’ when both of the groom’s to be parents will propose to the bride’s to be after both the couple reach 15 years old. When the groom’s to be is about to propose the bride’s to be, the groom’s side will bring ‘Kaken’, or the introduction symbol such as bracelet or beads necklace.

Indeed, engagement event is one step closer to a wedding. By an engagement ceremony, the couple declare that they will be serious in the relationship and ready for the future life together. Meanwhile, there are many unique engagement traditions in Indonesia. In case you ever heard, always spread love in every corner.