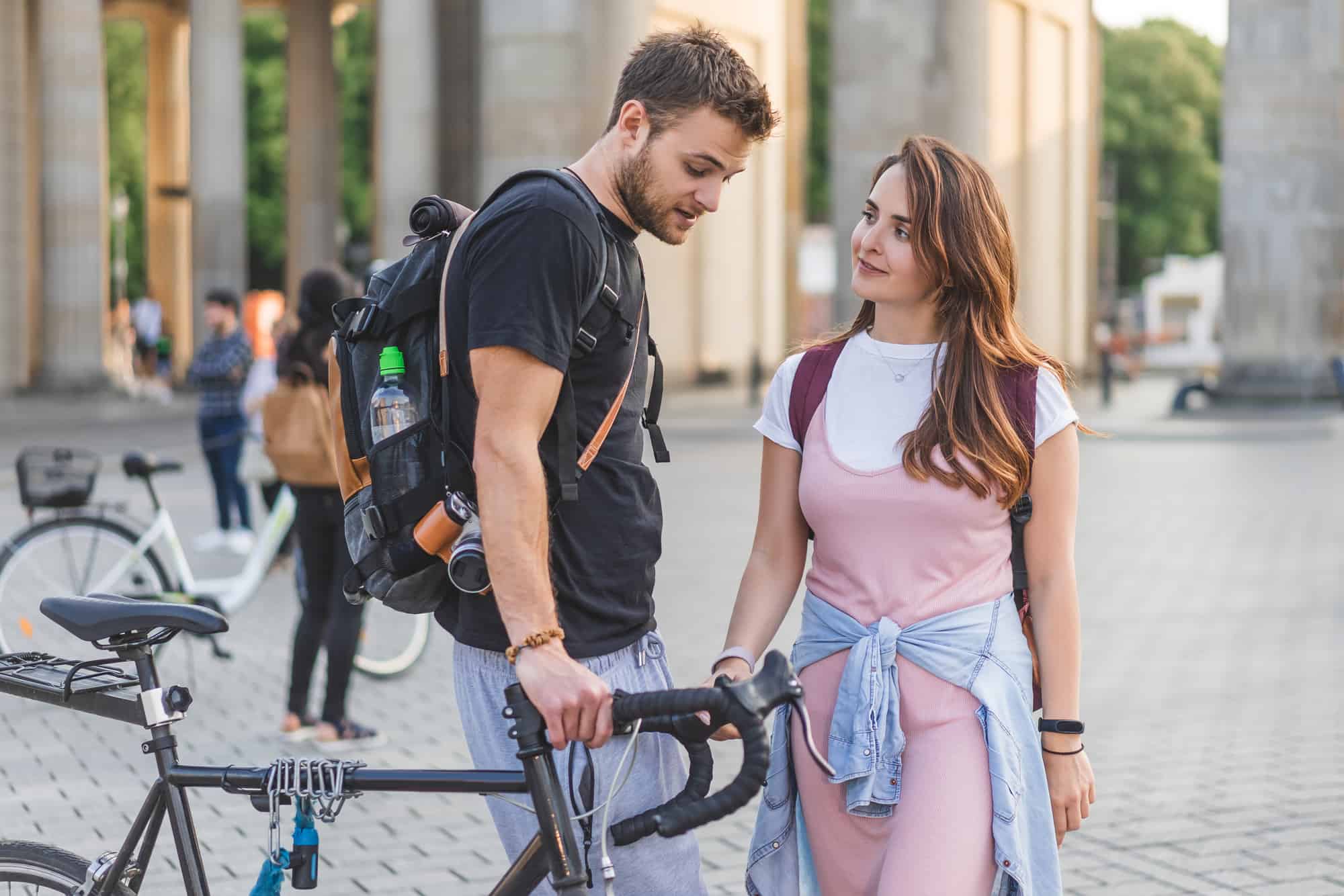 Every country has their own culture and customs to be followed, including in dating. As for European country, they indeed as modern as America, but they have several conservative rules when it comes to a man- woman relationship. If you are not German native or have never been to Germany, you may find some cultures very different than yours. Nevertheless, if you are dating a German, or going to live there, you have to be accustomed by their dating culture in Germany. Let's find out what they are!

Most German are open minded and don't like anyone who beat around the bush. They prefer a direct question in anything, and prefer people who speaks their mind freely. Germans rarely offended by these kind of questions, and they definitely will give you the same straightforward answer. But if you just meet him or her, or it hasn't been to long after both of you meet, don't ask a very personal question.

The gender role differences in Germany is not as strong as it is in America or Sweden. While couples in both countries tend to split the bill between themselves, German men are okay with taking all the bills. But it's not always smooth just like that. If you happen to have a conservative mind, and your boyfriend is the modern ones, he may wonder why he should take all the bills. But for some other German men, letting women paying their bills themselves is an insult to their pride.

All in all, different things happen for different condition. If you happen to be someone on your late teens or early 20s and dating someone from your peers, it will be better for you two to split the bills. You can't expect you boyfriend (who is still a collage student) to pay for your meals while he himself hasn't has a steady income yet.

Germans living with equality for men and women. This not applied when they go out to take meals. German couples split the house rent evenly between men and women. They also see each other as a strong and independent person, so you will rarely see a man opens the door for her woman. Not that they don't care, but men sees women can be perfectly well on their own. Oh, and yes, women doesn't has this privilege in public spaces - if you are the last person to board the bus, no one will offer their seat for you even if you are a pregnant women.

4. Germans Do Not Tell Lie, Even To Their Partner

Every country has their own means to show "politeness". While in some other countries politeness means showing attitude that wouldn't hurt the other ones, Germans don't think the same. In order to avoid hurting other people's feeling, we often make up some "white lies" such as pretending to greet somebody excitedly when we are actually not so fond of him. Germans never do such thing. They described politeness as "respect". And respect means telling the truth to somebody, rather than making up some lies to be found out later.

When you are dating a German, don't expect him to say only nice thing about you. For example, he picked you up from your place and you asked, "How do I look today?". If he said you are beautiful, means he thinks that you really are. But if he said that you put on too much make up, you have to seriously consider it on your next date.

5. They Are Not Fans Of "Light Conversations"

To get close to someone, you often make some silly jokes or talking about trivial matters endlessly with them. However, that would never happen for a German. "Light conversation" with no particular topics is never considered okay for German. That would be an American culture of "friendliness" who love to break the ice of awkwardness between people. As busy as Germany has always been, the people don't spend their time for something meaningless. If you want engage on a long conversation with a German, try some "heavy" topics such as politics, economy, or any subject he's interested in.

6. Germans Are Not Easily Offended

As they live with a strong gender equality, it's better for you to speak up about anything. You may have a different thought with him and it's okay to voice them out. Your German boyfriend will respect you for having your own view rather than be offended because you don't agree with him.

7. Learn About The World's Latest Issue

Germans are known for their smart and highly educated people. They like to discuss about the current affair happen in the whole world, and there's not reason for you not to following suit when you are dating a German. If you are usually ignorant and never care about any of these issues, it's better for you to start learn about them now! Thus you you will have a long and serious conversation with him. Germans love women with a broad knowledge and critical thinking.

8. They Did Have Sense Of Humor

Though they seem to dislike spending their time with groundless conversation, Germans did have a good sense of humor. Germans common first impression is that they are humorless, but once you get close to them and make them comfortable around you, the did love some silly jokes as much as Americans do. They may have different taste of humor, but smile and laugh are universal language, isn't?

But they indeed have some limit to their jokes. They do not accept jokes about their country's dark history, thus never say Hitler's name in front of them as a joke. They will tell you all you want about their history if you ask them, but they never accept it as a joke.

Germans never think that age is defining some qualities of a person. Germans are very open about this. They don't mind dating much younger girls, as well as an older women. Their age doesn't define their seriousness in a relationships as well. Also, Germans have tendencies of getting married a bit late than average Americans.

10. Do Not Expect For He/She To Be The Center Of Your World

Germans living independently and can manage themselves well on their own. Men view women in this way as well. They never thought women as a weak and vulnerable one to protect. Because of this, it's better for you not to expect them to keep check on you every now and then just to make sure that you take your meals properly. They have their own priority such as work, rest, and some of me time!

Also read: Signs She Cares About You

Your German boyfriend will never be understanding if you show up late for your date. Germans are known for their punctuality, and they see being late as something rude and it means you don't respect your partner. The same happen when a man was late to pick up his girlfriend at her house. Once more, if you accidentally meet her parents, make sure you take your girlfriend at the exact time you have promised her father.

12. Display Of Emotion Is A Turn Off

Do not show too much of yourself when you are just on early stages of dating. Germans, both men and women, would quickly turned off if you show too many emotion. It better conceal your anger or your sadness when you just starting to know each other. This can be worked out later, if you are comfortable enough to be around your partner.

13. Do Something Special For Them

The next dating culture in Germany is they are sweet. Couples usually wait for a special moment to do a special thing to their partner. However, you don't have to wait for Valentine's Day which come only once a year to give them a present or surprise. Show them a little bit of your effort by giving them a present even on a casual day. It will show them how much you care about them. But if you only doing it on Valentine's Day, they would rather think that you only care about them on the particular day.

Finding love through the internet has become a new trend in the world of dating lately, including for Germans. They are okay with finding partner through online dating websites, only to find out something was wrong five to six months afterwards. Because of that, they tend to take this online partner not too serious, and prefer to find one in the real life instead.

Germans indeed has their own culture when it comes to dating, if you are interested to date a German, this new discovery of their culture is of course very useful. Those are not an absolute culture that everyone in Germany would follow, as every person has his own unique character and has their own way of thinking and behave when they date. These are only common things German may do when they date. Thus, that may be great knowledge about dating culture in Germany. In case you ever heard, always spread love everywhere.

Michelle Devani
My name is Michelle Devani, and I've been helping people with their relationships since 2003. In 2017 I decided it was about time I started a blog on the topic, and since then more than 2 million people worldwide have read my relationship advice. Drop me a comment below to let me know what you think.
You May Also Like
41 Secret Things Your Boyfriend is Thinking But Won't Tell You
No Comments
What Does It Mean When A Girl Calls You Love? (9 Possible Reasons)
No Comments
How to Talk to Your Girlfriend about Joining The Military - Make Her Support You
No Comments