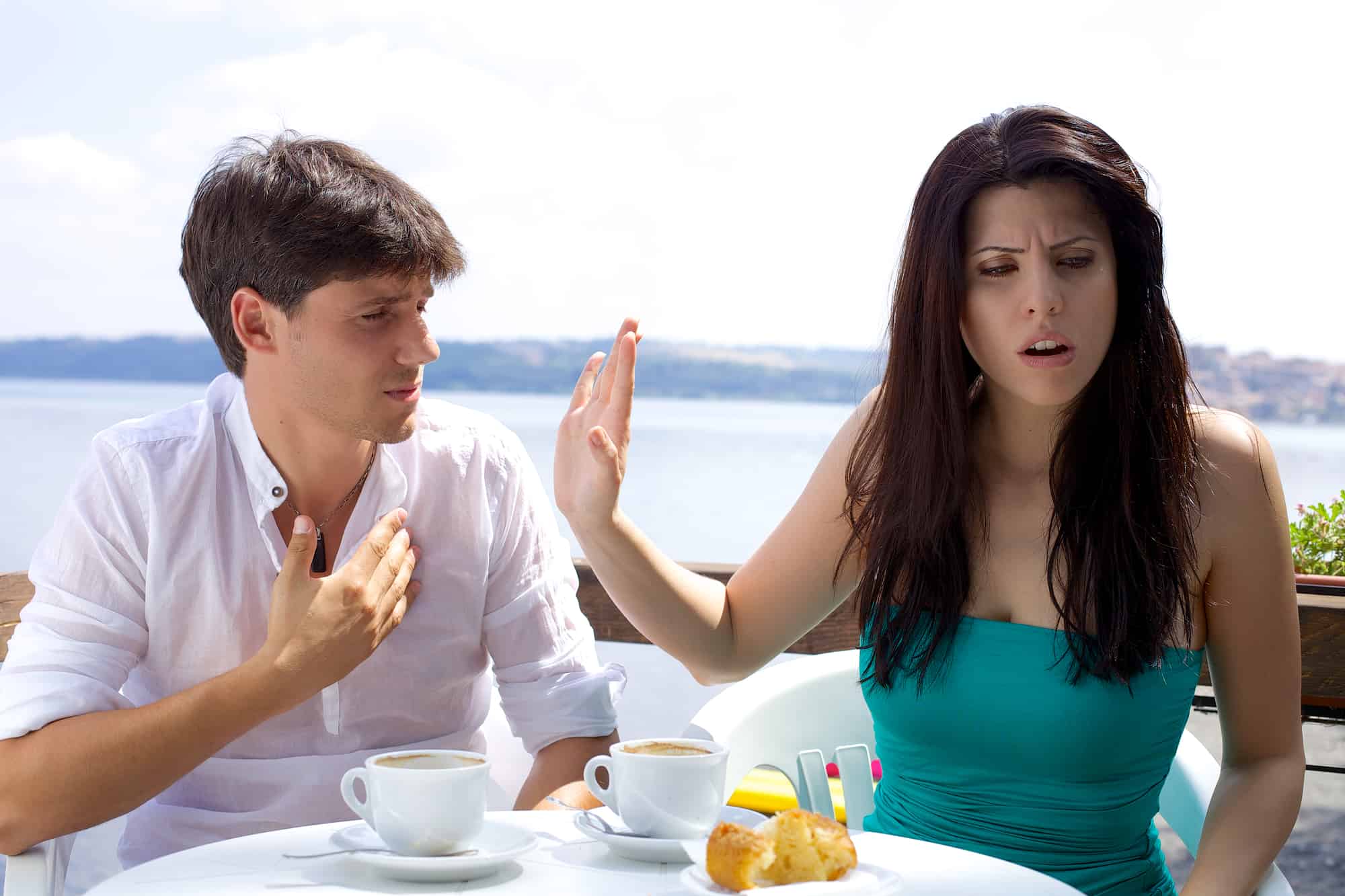 It makes sense to a man when he likes a girl and she accepts the invitation to go out with him. Then, it baffles you when you try to ask another girl the same, and it seems you’ve basically stirred the hornet’s nest. What happened to make one girl so receptive, but the other offended and mean about it?

You might get yourself so concerned and worked up trying to understand some girls who act unreasonably. You will get truly flustered by the behavior of some queen bees because they are so sweet to their girls, but become mean to boys. Could their mean girl behavior be a result of boys having hurt them in the past, or they are naturally mean girls?

At the end of the day, no one acts for no reason, even mean girls. Whether their mean girl behavior is justified or not is another issue, but most girls have relatively valid reasons for acting weird and mean.

Do you like a woman but she’s acting like a poked bear every time you talk to her? If she doesn’t act that way towards guys, then you have your answer. However, if she shows her mean girl behavior to other guys, below are some of the reasons why she is acting mean.

1. She doesn’t trust you

You can give her time if you think she is worth the wait. When you’ve decided that underneath her cold behavior, she sounds like someone who will make your life beautiful, give her time.

Sometimes, girls are mean simply because they don’t like a guy. You can twist the meaning of their cold attitude all you want, but the truth doesn’t change. Girls who like you won’t hesitate to drop the cold fade they show everyone with you.

They might play games for a while, but such girls will soon warm up to you.

3. She is scared you’d hurt her

Hurt girls are like beautiful deer who won’t hesitate to bite you if you try to poke their wounds. When bold girls with fragile hearts meet someone they like, they are usually over-cautious of how they act around him. As such, she is only acting out of fear.

4. You’re more of a stranger to her

Girls have been told by their mothers to be wary of strangers. That learning spills into their adulthood. Even as adults, smart girls don’t allow themselves to get carried away by their emotions.

If she is mindful of the risk of getting close to a stranger, she might tell you straight up. Whether she tells you or not, try to seek her out as a friend before proposing dating.

5. She is playing hard to get

Beyond being careful not to fall for the wrong men, mean girls are the way they do because they like to play games. A sign that she is playing games is that she will not push you away, but she won’t let you get too close to her either.

6. She just got out of an abusive relationship

Most mean girls turn out that way because they’ve been in one abusive relationship or the other. If a woman just escaped an abusive romantic relationship, it is normal for her to dislike or even hate men.

She knows not all men are like her ex, but her internal defense instinct tells her they are.

7. Her friends have said ugly things about you

If you have mutual friends with a mean girl, or if you’ve dated one of her friends, the mean girl you like might have had her mind poisoned against you. You might need to talk to her to let her know the rumors are lies or half-truths.

8. She isn’t emotionally mature for a relationship

She might look like a bombshell of beauty and perfect outwardly, but she might be emotionally unstable. If she has a series of personal problems, she might not be ready for a relationship that happens between mutual adults.

9. She is naturally bitter

You may have watched movies where some of the characters are portrayed as soulless. Some mean girls are like that. It could be a psychological defect they were born with or a physiological condition they struggle with. Whatever condition she has, a mean woman can be naturally bitter over her situation and never let anyone in.

10. She is insecure in most relationships

Teasing a woman who is emotionally beaten will make her act mean. She might be unaware that her insecurity is showing, but you’ll notice if you look closely. If you know her history with previous boyfriends, you’ll have an idea why she is insecure about any romantic relationship.

11. She is envious of the other women in your life

A woman who likes you can be mean to you if she assumes the other girls in your life are more important to you than her. They might even be members of your family and she might feel guilty when she finds out who they are.

However, she might be acting that way because she’s afraid of losing you.

12. She thinks she is out of your league

A woman can be mean towards you if both of you don’t run in the same circles. If your party of friends includes snobs who don’t relate with her circle of friends, there might be friction. If she is particular about dating someone on the same status level as hers, she might show you her mean side.

13. She earns more than you do

If she is on a higher financial status than you are, a career-oriented woman can look mean. It might simply be a matter of principle for her not to date someone who earns less than she does.

As such, even if your age is appropriate for her, if your income doesn’t match, she will be reluctant or downright mean about dating you.

14. She’s never been genuinely loved before

A scared, unloved woman will scratch you because she doesn’t know how to respond to affection. She’s never being shown the kind of support that will lead to her opening her heart to you.

Being mean is a knee-jerk reaction to acts of love and service. Her behavior is a result of a lack of exposure to love or affectionate gestures.

15. She’s from a broken family

When you ignore the sign of abuse in a woman, you can easily call her mean. If she had a bully for a father or brother, it explains why she’s wary of men generally. Forcing your way into her heart won’t work because she’s a skittish hurt woman.

16. Someone was mean to her first

Being mean is the only method of response she knows because she’s been bullied all her life. Some bullies become so because they first had teachers who taught them the bully act.

If her actions seem bullish, it’s not entirely her fault, she was taught by example.

17. Being mean is her defense mechanism

A woman who doesn’t know how to deal with affection will lash out with caustic or sarcastic words. Taking the lead to show her what is possible when one is vulnerable with the right person is a good place to start.

Talking alone won’t get her to warm up to you, you have to show her.

Propositioning a woman who is mean towards you will only aggravate her. Get enough information about her from her closest friend and you might realize that she is the softest person.

19. You caught her at a bad time in her life

Engaging a woman at the wrong time in her life can make her look mean. She thinks you’re an additional threat to her peace of mind. Give her some space and suggest friendship. Down the line, you’ll find out that you were wrong about her being mean because her meanness was just a phase.

How can you tell if a girl is into you?

She might give you a hard time at first, but she will become soft towards you soon enough.

Is she being mean or flirting?

When a girl is acting mean to you, it might be her way of telling you she likes you. She doesn’t want to directly ask you to date her, so he acts irrationally to get your attention. It is silly but it happens.

How do you know if a girl likes you but is hiding it?

She will play the push-and-pull game with you. She will make herself available but not too much.

What does it mean when a girl gets close to you?

It means she likes you a lot and wants to get to know you better. She might even want you to date her even though you’re in a relationship already.

Is being overly friendly flirting?

Sometimes, when you are too friendly with a woman, she assumes you want to be more than friends. Women are emotional beings, so they easily get attached to a guy showing them attention.

Being mean isn’t always attractive, especially if you mostly like nice women. Some girls are ignorant that they are mean, while others do it on purpose. You deserve to be with a kind and loving woman. So, if the girl you like doesn’t adjust her mean behavior, you should move on to another girl.