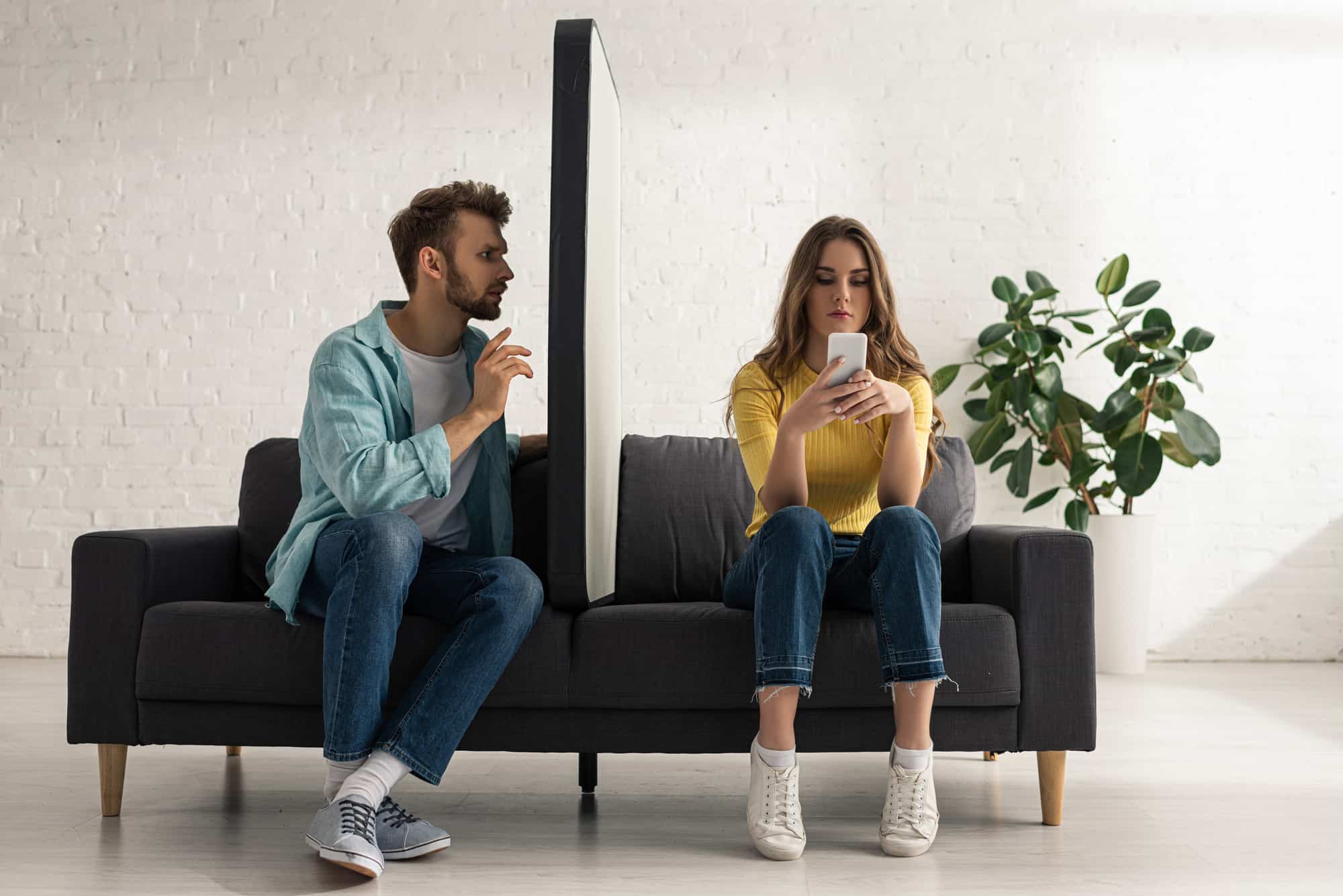 What Happens If You Ignore an Aquarius Man? (11 Possible Things He’ll Do)

Do you wonder what happens if you ignore an Aquarius man? This guy can be very confusing when you stop giving him attention! If you have decided to ignore your man, what will be the consequences? It’s important to understand these things.

For this reason, we are going to talk today about what happens when you ignore your Aquarius man, the possible things he will do, and how he might act. That way, you will know if this is the best strategy for your relationship.

Make sure you take the time to get to know your Aquarius man because each one is different, unique, and spontaneous!

An Aquarius man is a tad on the mischievous side. However, he’s not always all fun and games. He often is a deep thinker and enjoys having intellectual conversations, so be ready to share your thoughts with this man! He’s very self-confident, independent, bold, open-minded, smart, fascinating, unique, sensitive, and romantic when in a relationship.

You may find his rebellious ways to be very confusing. Aquarius men enjoy being mischievous, so he won’t rush to appease you if you are totally lost in regards to his behavior.

Since he has deep thoughts, you know that he’ll want to keep the conversation going. He’s a good listener, though, so you can share all you want to with this boyfriend.

If you’ve just started dating an Aquarius man, you may want to find out if he’s interested in you or not. If you’ve been dating one for a long period of time, it might be smart to understand how he acts when he stops loving you. He will likely become cold and distant if you ignore him because he wants to be in a stable relationship and doesn’t like games.

How Does An Aquarius Man Act In A Relationship?

An Aquarius man may be fun, sexy, mischievous, unpredictable, cold, distant, unique, shocking, exciting, radical, easy-going, faithful, and romantic when in a relationship. Because of this, you may not know what to expect from him. We can speculate about how he will behave if you ignore him, but really, each Aquarius man is different. No one is the same. That’s part of their charm!

Who can resist an Aquarius man who is both fun and mysterious? If you enjoy planning and knowing what to expect, he may not be the best pick for you. Instead, you should try a sign that is more predictable and stable. An Aquarius guy will likely surprise you on a regular basis. These guys do act differently depending on how long you’ve been in a relationship with one.

If you’ve just started dating this guy, there’s a good chance he’ll just walk away if you are playing games with his heart. No one enjoys being toyed with! However, if you’ve been in a relationship for a while, he may want to know what’s wrong, want to communicate with you, and want to stay loyal and faithful to you because he loves you!

What Happens When You Ignore An Aquarius Man?

1. He may be curious as to why you are ignoring him

Be careful when ignoring your man because he will want to know why you are behaving this way. If you have an agenda you don’t want him to know about, you may want to reconsider your strategy! He’ll likely ask you why you’ve stopped communicating with him in your relationship and question your actions.

No one enjoys being toyed with, so be cautious when you take this strategy. He could get very upset with you, wondering why you have decided that he deserves this strategy; he may play games right back with you and stay mad for quite a while about this.

3. He may ignore you back

Since Aquarius men can be unpredictable, there’s a chance he’ll just ignore you because that’s what you are doing to him. If you don’t want this to happen, it’s probably best not to ignore him or to have a good reason as to why you are doing it. If you are truly upset about something, it may be best to talk things over with him.

4. He could withdraw from the relationship

If you’ve been working on making this guy fall in love with you, ignoring him may not be the best strategy because it could take things back to how they were before you put forth the efforts in the relationship that you did. He’ll likely not trust you if you behave in this way, so take caution before playing games with his heart.

There’s always the chance that your man will chase you if you ignore him. He’ll run after you, wondering what you are up to, why you haven’t called, and who you have been hanging out with. He’s not really the nosey type, but he may want to communicate with you about the things that have been going on in your life.

Aquarius men are generally loyal and faithful. However, if you’ve just started dating one, he may decide to play the field and not be with only one woman. If you’re the jealous type, don’t let him slip through the cracks by ignoring him over something petty.

7. He could stop loving you

If you’ve been dating a long time, your man might think you’ve fallen out of love with him. This may cause him to stop liking or loving you. He’s not generally insecure, but if he thinks your feelings have changed, he may question his own feelings for you.

8. He will probably wonder what he did wrong

Your boyfriend may think something is up with you. He can be a little sensitive and romantic, which are qualities he looks for in a woman, too. Be ready to answer his questions as to why you’re ignoring him.

9. He will likely want to talk things out

An Aquarius man likes to communicate and talk about the serious stuff in life. If he thinks you are upset about something, he’ll likely want to have a conversation about the subject. If you don’t want to talk right now, you may want to turn your phone off and take some time to yourself.

10. He may shower you with attention

Since an Aquarius man is unpredictable, you really just never know how he will behave! He may get mad; he might break up with you; he may even chase you or shower you with tons of attention. If you know him well, you should think about his personality when you take action!

An Aquarius man can be a rebel. He may just cut ties with you for good and decide your partnership is not worth the trouble if you are going to play games. If you aren’t sure about your feelings for him or are very upset about something, it’s smart to talk things out rather than cutting communication altogether.

If you know you love him and think he loves you, he’ll remain faithful and committed to you, but you shouldn’t ignore him for a long period of time, as you don’t want to lose him.

How does an Aquarius feel when ignored?

Aquarians don’t enjoy arguments, so they will likely not start a fight, but they may think about ending the relationship. If you don’t want to lose your Aquarius man, don’t gamble with your relationship because no one likes the silent treatment. It’s your choice, but I wouldn’t upset this Zodiac sign.

Why would an Aquarius man ignore you?

If you move too fast in the relationship or if you have a strong connection, an Aquarius man may withdraw, especially if you haven’t been dating for a long period of time. Relationships with Aquarius men can be confusing; if they ignore you, it may be a wake-up call!

Do Aquarius men ignore their crush?

Usually, Aquarius men want to chase the women of their dreams, especially if there’s a strong connection. Their reactions to being ignored may include adoration, giving you more attention, or starting to chase you more. Ignore an Aquarius, and you may be confused by his reaction.

How do you make an Aquarius man miss you?

Be fun and spontaneous when you are around your Aquarius man, and he will surely give you more attention and miss you when you are apart from one another. The problem is that if you ignore an Aquarius man, he may confuse you with his actions! They are mysterious!

How does an Aquarius act when hurt?

An Aquarius man is a confusing creature. Wouldn’t you agree that that’s the truth? However, ignoring an Aquarius man can make things even more uncertain in a relationship! Are you dating an Aquarius man? What are your circumstances? We’d love to hear from you! Please leave a comment, and share!

You May Also Like
Things You Need to Know About Dating A Partner Who Doesn't Show Affection
No Comments
How to Get on A Capricorns Good Side - The Love Tips Here
No Comments
How Do You Know If A Scorpio Woman Likes You, And How Does She Flirt? (11 Vital Clues)
No Comments