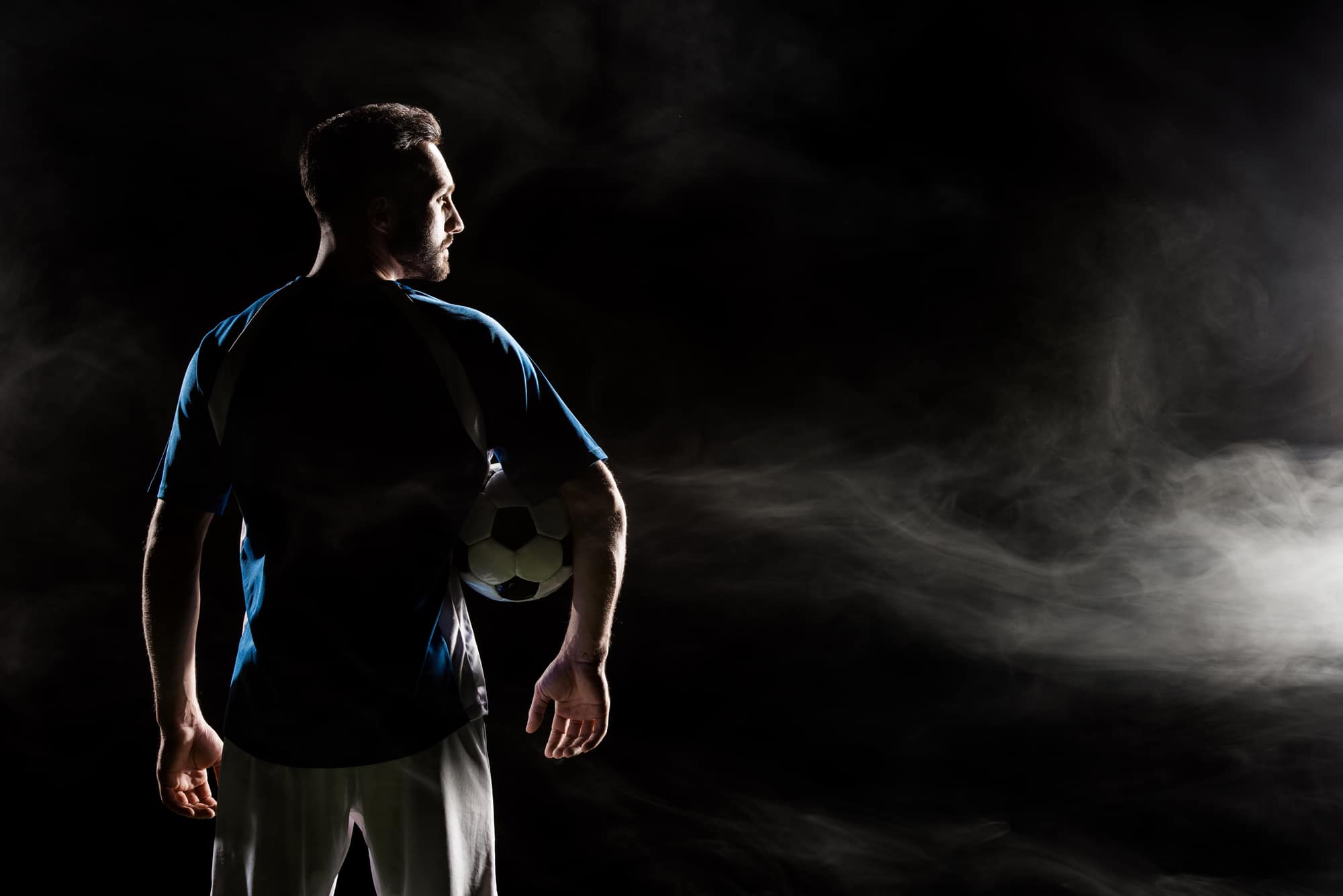 20 Sweet Reasons Why You Should Date a Soccer Player

1. A Soccer Player Is Attractive

A guy who plays sport will always be such a heartthrob. He is always the center of attention in the field. Every single step he takes and every move he makes look cool and make the girls scream. He makes his surrounding proud of his skills. He and his soccer team bring the school's name into the soccer competition. Every girl wants to date him, every boy wants to be like him.

The skills that a soccer player possesses can give him a charisma that no one can deny. He doesn't have to try so hard to get noticed. He just acts the way he does and everybody will be amazed. It's more amazing if you can call him your baby.

Soccer players always need to keep their bodies healthy and fit. They do exercise regularly. If your boyfriend is a soccer player, he may ask you out for doing exercise together. Doing exercise will be more fun this way. You can go running or working out at the gym together. That will be such a healthy date for you and him. Sounds interesting, huh?

A soccer player needs to keep his diet healthy. He likes to eat healthy food that contains enough carbohydrates, protein, vitamins, calcium, etc. He will ask you to live a healthy life too.

3. He Likes To Take You To A Soccer Game

A soccer player must love to watch soccer games. He has his favorite team. When he takes you to a soccer game of his favorite team, you'll see how excited he is. Although he can be so talkative when criticizing the game or complaining about the referee, his excitement will get you every time.

4. He'll Give You The Vibe Of Dating Beckham, Messi, Ozil, Or Another Hot Soccer Players

Are you a fan of those hot soccer players like David Beckham, Lionel Messi, Christiano Ronaldo, or the other hot guys you know from the soccer world? Whether you are or not, if your boyfriend is a soccer player you will get the vibe of dating one of those hotties. You will experience those things like supporting your man from the bleacher, screaming out the loudest when he makes a goal, giving him water, and encouraging him to keep fighting.

5. His Competitive Side Will Blow Your Mind

In order to win the game, soccer players must compete. The competition between soccer players triggers them to be competitive in the right way. If a boy plays soccer, there's a high chance that he's the kind of person who doesn't easily give up. He'll compete in order to achieve what he wants. When a soccer player has a crush on you, he will do whatever it takes to get with you. And, when he finally gets to be with you, he won't let anybody else take his place.

6. He Is A Problem Solver

Through many competitions, many practices, many wins, and many losses, a soccer player has learned much. When a problem comes between you two, he'll find a way rather than walk away. For him, a problem exists to be solved not to be scared about. You really should be thankful for having him in your life as he's not one who takes the easy road. If there's something to work out, he'll do it for the one he loves.

7. Your Relationship Will Be Less Drama

Who's done with drama in their relationship? Tired of an inconsistent person in your love life? Having a relationship with a soccer player won't bring you any drama that makes you wanna pull your hair out. His consistency won't let you hang on to a stupid relationship. He may play with balls, but he will never play with a girl's heart. He knows what a real game is. And for him, a relationship isn't a game to play with.

8. He Has Great Self-Esteem

To be a soccer player, he has to train hard to improve his skills. He must believe in himself that he can do it. His confidence brings him closer to his achievements. He definitely owns great self-esteem. When he first decided to get into a soccer team, he might not be as good as he is today. It took him many falls and pains to be where he is now. You must be proud to call him your baby.

9. He Has Excellent Time Management

As a guy who plays soccer, he will need to manage his time between school, soccer, and the other stuff. He must be disciplined and attend the soccer game or exercise on time. Hence, he'll definitely pick you up on time when you guys go on a date. You don't have to worry that your boyfriend will be late. He's not such a guy to waste time. So, get yourself ready earlier, girls.

Being on a soccer team, a soccer player must have a lot of friends. It can be his teammates, his opponent teams, his coaches, his team managers, his seniors, his supporters, and any other people. That needs him to be friendly and easy-going. That means you have a bigger opportunity to be get noticed by the people around him. Somehow, that makes you more popular.

11. He Loves To Teach You About Soccer

He knows exactly how hard it is to keep the ball. Once he gets it he wouldn't want to let it pass by. So, once he got you by his side, he will cherish you and do his best to keep you safe. He will protect you and be responsible for everything you and him go through.

An athlete must have good concentration in order to keep the game running. He always focuses on what's in front of him. When you have a soccer player as your partner, he's more likely to focus on what you two are doing. No more catching your beau have another attention except you.

14. He Will Warn You When You Do Wrong

A real soccer player must know the strategy to win the game. He's learned a lot from the mistake he made or the enemies made. He knows what to do and what's not to. If he catches you do something that will be bad for you, he will warn you not to do it.

Playing soccer must need skills to control the balls, pass them, and make a goal. This surely improves the intelligence of a soccer player. There will be no doubt that a soccer player is smarter than the other guys. You girls can't ever deny a smart soccer player, can you?

Playing sport is like going to war. Go hard or go home. That's probably how a soccer player boyfriend will do to his love life. When it comes to the thing he loves, he will fight for it no matter what the odds. If he really wants you to be in his life he will fight for you.

Believe it or not, a soccer player is looking hot while wearing a soccer team jersey, but three times hotter in a casual outfit. When he is sweaty, he can't be any hotter. Nevertheless, when he's changed his outfit, he turns into a fresh and stylish guy.

Since soccer needs good teamwork between the players, he's getting used to some things together. He will never let his girl do things alone. As long as he can do it with you, he will make his time to keep you company. Who doesn't fall for this guy?

Another quality that a soccer player have is agility. He's trained to move and understand quickly. So, while you two are walking around and an unexpected danger comes, he will save you. Hopefully, you will be comfortable and safe around him.

20. He'll Make You The Luckiest Girl

Among those pretty girls who want to date a soccer player, he chooses you. Now you know how it feels to be the luckiest girl.

Well, girls around the world, those are 20 reasons why you should date a soccer player. So, if you meet a soccer player and he would like to get close to you, it's not a bad idea to give it a try. Let him and you work it out to see if you guys can be a great couple. In case you ever heard, always spread love everywhere!

Michelle Devani
My name is Michelle Devani, and I've been helping people with their relationships since 2003. In 2017 I decided it was about time I started a blog on the topic, and since then more than 2 million people worldwide have read my relationship advice. Drop me a comment below to let me know what you think.
You May Also Like
21 Sneaky Tips On How To Impress A Girl With Chatting
No Comments
How To Play Hard To Get With An Aquarius Man? Zodiac Signs
No Comments
What Does It Mean When Your Boyfriend Makes Excuses Not To See You
No Comments