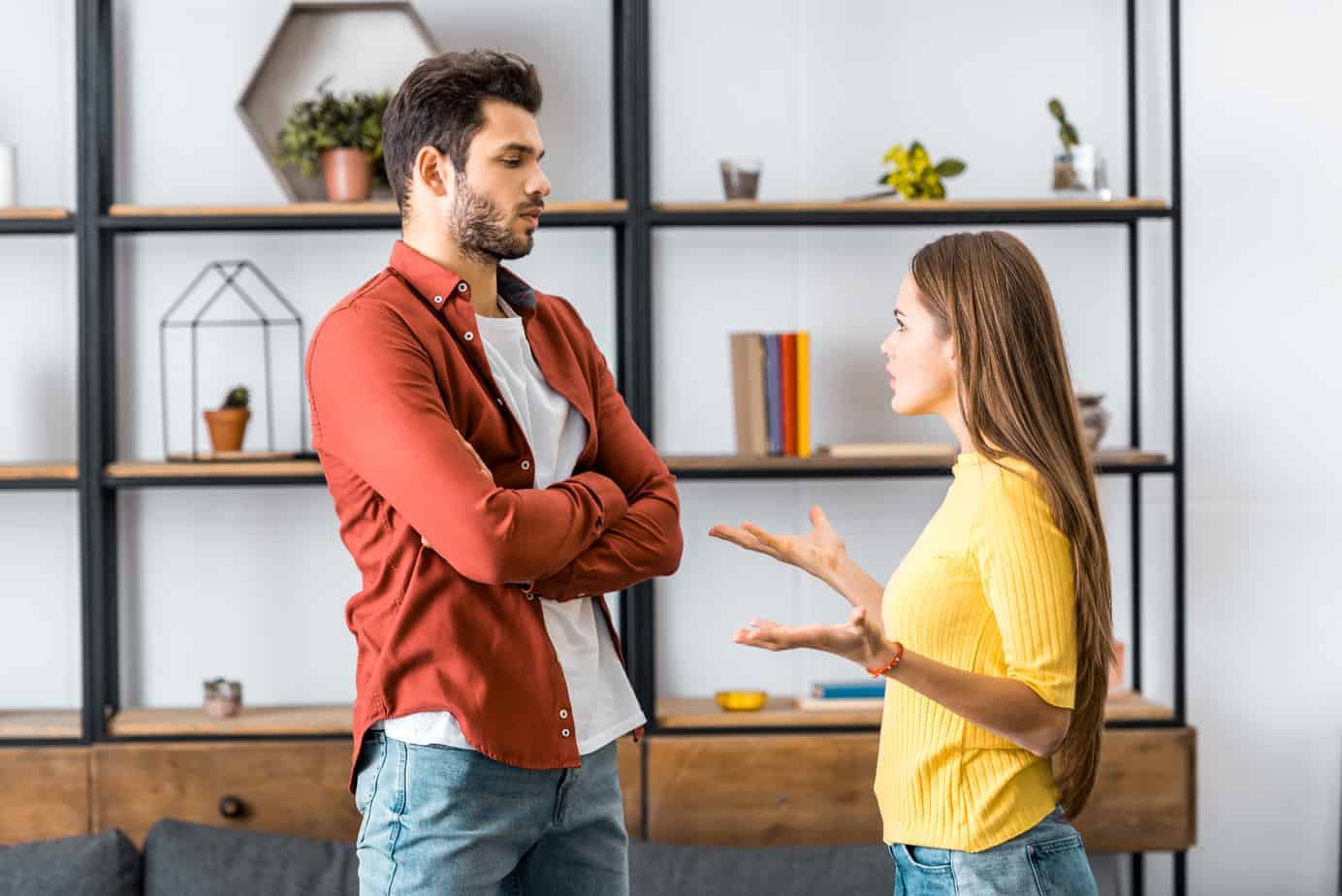 The way one man acts when he no longer wants a woman is different from the way another will.

When judging a man's rejection tactic based on zodiac signs, put in mind that he is a man first and his zodiac sign is just a bonus. Zodiac signs characteristics help you understand why one man will ignore you when he is mad, and the other will yell at you to express himself.

An Aries man can be a bit unpredictable because he belongs to the fire zodiac sign. Yes, fire burns, but some fires burn quietly until only ashes are left behind.

If your Aries man is the type who burns quietly, you might not see the signs that something is wrong with your relationship until it’s too late. No woman wants to feel like an idiot or a failure because she didn’t notice her relationship was falling apart.

Has your Aries guy been acting out of character, but you can’t seem to pinpoint exactly what is wrong? Do you suspect he is ignoring you physically and emotionally, but you don’t have enough proof to conclude?

If you answered yes, this post will help you know if an Aries man is still interested in you or not. Then you can have a clearer perspective of things.

1. The communication line has been down for a while

Most times, the first sign that a relationship is going down is when communication ceases between the couple. Once communication (which is the most important glue for keeping relationships steady), comes to a standstill, the foundation starts to crumble.

Love and attraction have their place in relationships. But if there is no channel through which these two can be communicated, things will fall apart. Have calls between you and your Aries partner almost ceased completely? Has he stopped using words to communicate with you? Does it seem like you’re the only one talking and he is hardly listening? Then, it’s time to exit this Aries man’s life.

2. He doesn’t appear concerned about the lack of quality conversation

It is bad when communication becomes strained or limited between you and your Aries partner. However, it is worse when he doesn’t seem to care about the state of things. There is a problem if you used to have quality conversations with your Aries guy, but now you both can’t seem to exchange more than perfunctory words.

When you try to find out what is wrong he says nothing, but it’s obvious there’s something wrong somewhere. There is no way to fix a broken connection if you don’t know where the fault line is. You deserve to be with someone willing to have good conversations with you. If this Aries man isn’t doing that, he is not the one for you.

3. He already mentioned he isn’t interested in a committed relationship

Aries men are blunt and straightforward. An Aries man is also determined, and like a ram with a purpose, he pursues the girl he wants. However, if he isn’t interested in being committed to you, he might tell you from the start.

To know if an Aries cares for you, he won’t beat around the bush. As such, if both of you had the initial understanding that what’s between you can end anytime, you shouldn’t be surprised when he starts displaying these signs. It will be painful to accept this fact if you already fell in love with the Aries guy, but you have to let him go.

4. He doesn’t mind flirting with other women in your presence

No woman should have to watch her guy flirt with other women, even if he is no longer interested. Aries find it easy to flirt both harmlessly and shamelessly. If your man is doing it just because it’s second nature for him to do so, you’ll know.

If he is doing it to hurt you or tell you he is moving on, you’ll need to pay more attention to him. If the level of open flirtation has increased, you should be concerned instead of indifferent. This can be a sign that he means to dump you and date someone else.

5. You just have the ‘feeling’

Has your gut feeling been telling you that something is not right between you and your Aries partner? Even though he is usually straightforward, your Aries man can be cunning if he wishes to be.

He is smart and like other men, he can cover his tracks if he wants to. Don’t ignore that weird feeling because you think he’ll never be shady with you. Observe him more than before so you can catch him in his lies.

6. He appears ready to leave a date that just started

Have date nights with your Aries guy become something out of a comic movie? Has awkwardness crept between both of you? Does it look like he wants to leave not long after he arrives for a date?

If it’s beginning to feel like you’re forcing him to go out with you, it might be the end of both of you. If he can’t give you a straight answer about why he’s acting that way, he’s just stalling before giving his final rejection.

7. He avoids the places you can usually find him

You should become wary if you no longer see him in the places he used to visit regularly. If you can’t easily reach him on the phone or at home, and he doesn’t make any attempt to reach you, accept you’re no longer his girl. A person can only hide for so long in a place both of you live and work.

With time, you’ll find out why he ghosted you. However, you don’t have to wait for him to come around. You should go about your life and start dating again.

8. He doesn’t invite you to explore new things with him anymore

An Aries man always has one new idea or the other to explore. He wouldn’t date someone who cannot share his interests. As such, when he likes the woman he is dating, he’d invite her on his adventures.

If he used to share novel ideas with you, but now seems to be suddenly living a boring life, you should suspect him. He is still doing exciting things, he’s just not doing them with you anymore. He’s probably doing them alone or with someone new.

9. He can’t seem to overlook your mistakes

One of the things that will let you know that an Aries man is displeased with you is that his outburst of anger will be turned towards you more than before. When he cherished you he placed you on a pedestal, and you could do no wrong.

Now that he is no longer interested in you, he’s kicked the pedestal from under your feet and everything you do pisses him off. People make mistakes but you don’t deserve to be treated like you’re a mistake.

10. He doesn’t get upset at anything anymore

Again, despite being a naturally passionate character, an Aries man can be cunning or simply indifferent. When something that should have caused a war between both of you makes him indifferent, just accept that it is over.

Don’t go poking him deliberately to see how he’ll react, but accept he doesn’t like you anymore if you notice he doesn’t react to anything you do anymore.

11. Your Aries man has started treating you like a mere friend

When an Aries man doesn’t worry about your movements, who you’re seeing, or where you’re going, it means he has lost interest in you. An Aries man has a possessive streak that makes him easily jealous.

Your Aries man would usually be concerned when you don’t get back at the right time from somewhere you told him you were going. If his recent attitude shows that he doesn’t care whether you return home early or not, it’s a sign he is ready to move on from you.

12. He seems to have lost interest in touching you

Romance and physical intimacy are important to an Aries man. If he isn’t getting them from you he is doing so from someone else. If he has a voracious appetite for sex but has now stopped approaching you for it, it’s the end of the road for the relationship.

While relationships aren’t all about sex, the physical connection is very important to strengthen the bond. As such, things as little as holding hands and hugging shouldn’t stop.

13. He doesn’t confide in you again

Dating a man means he becomes your friend, not just a sex buddy. If your Aries partner used to confide in you about his life, work and family but he suddenly stopped, he doesn’t trust you anymore.

Once trust is no longer in the equation, the relationship will become shaky and sex alone won’t give you a hold on his heart. Moving on from him and building trust with someone new might be the best option for you.

Do Aries men come back?

If an Aries man loves and trusts you, he will come back to you regardless of how much you hurt him. It is rare to have an Aries guy tone down his ego to return to someone who hurt him.

Why does an Aries man ignore you?

An Aries man ignores you because you’ve stopped looking interesting to him. He loves the rush of new and adventurous things. If you slow down his pace, he will push you behind.

Should I text an Aries man first?

An Aries man loves to do the pursuing, but he doesn’t mind being pursued once in a while. He will find you refreshing if you text him first, just don’t overdo it.

How do you make an Aries man obsessed with you?

An Aries guy is obsessed with a woman who knows what she wants and goes for it. He wants an ambitious partner with whom he can move on the same wavelength. Once you establish the right rhythm with an Aries guy, he will place you above everyone else.

How do you get an Aries man's attention back?

Using an Aries man’s tactics on him might be the only way to get his attention back. If you used to give him too much attention, reduce it. Flirt with other guys and make yourself unavailable in different ways. He will seek you out first.

The challenge with the Aries man is that he can be unpredictable. You think you know him, but he becomes someone else overnight. These signals will help you understand when your Aries partner is changing before your eyes.

You May Also Like
9 Unique Ways On How To Make A Girl Fall In Love With You Just By Texting Message
No Comments
Charming Ways To Make Your Girlfriend Obsessed About You
No Comments
Should I Marry My Boyfriend When I Don’t Feel The Spark Anymore?
No Comments