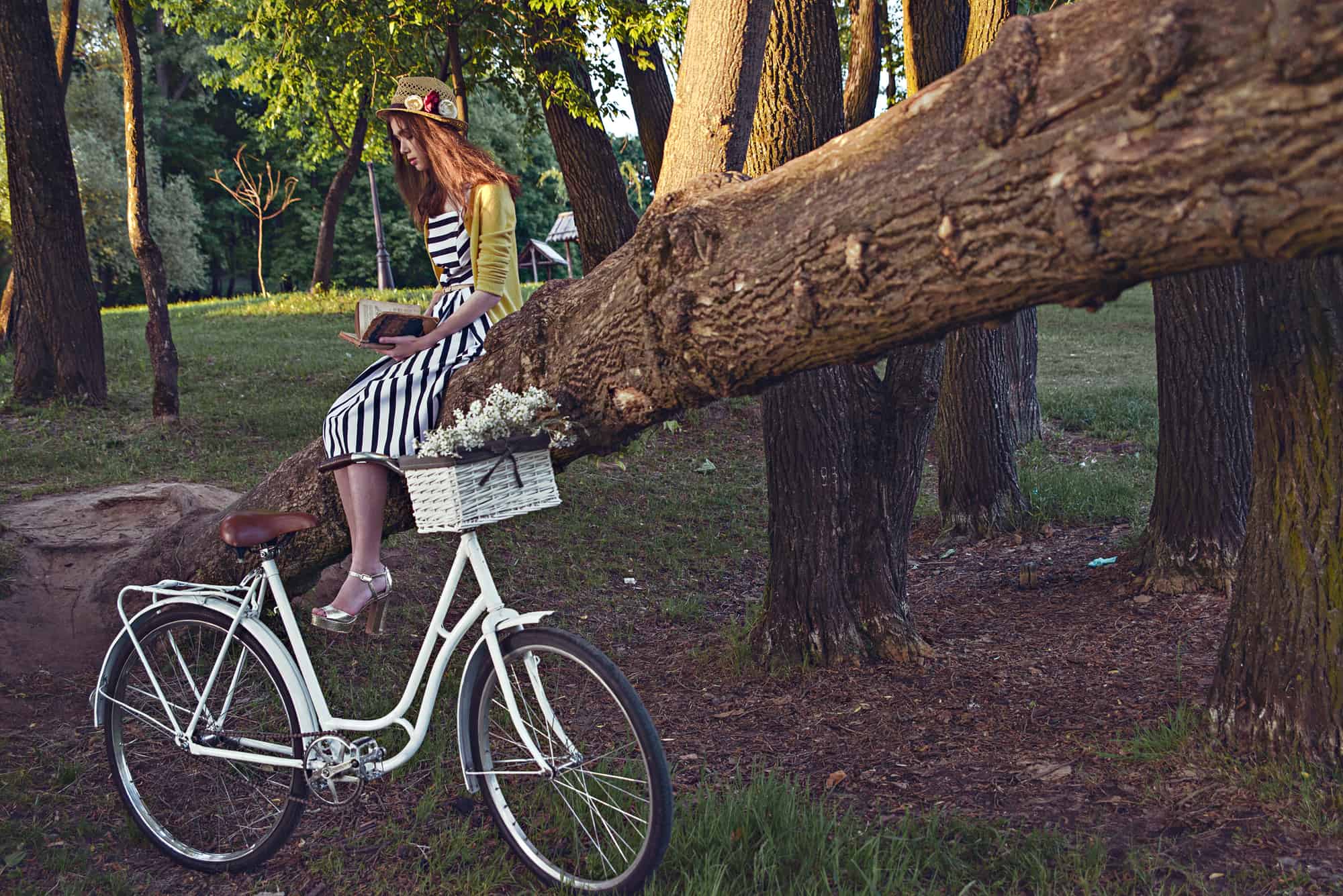 26 Reasons Why You Should Date A Girl Who Reads (#Hot)

A girl who is found alone, on the corner of a cafe, lost in something but somehow doesn't look lonely. Her hands must be holding a book. Yes, she is a girl who loves to read. In an era where girls are all trying to look pretty with full make up on, a girl who reads gives off different feeling of sexiness.

She looks mysterious and somehow wake up you curiosity instinct to know her better. Dating someone who looks like already having books as boyfriend is never wrong. Do you want to know why?

1. She Is Pretty Independent

A girl who loves to read is an independent. She could spend their time perfectly well on her own. Just give her a book, and she will not bother you for hours. She hangs out with the character she reads as company. She won't be upset when you come late for a date, but she might also ignored you for days when the new Harry Potter spin off released. Don't worry, she will come back to you as soon as she finished it. She truly knows how to spend their alone time well without annoying other people.

2. It's Not Hard To Please Her

Believe it or not, a reader is someone simple. She is romantic to her blood, and easily swoon by a simple sweet words. She appreciate everything given with sincerity, say it a simple hug, a kiss, or a goodnight text. A girl who reads can be carried away just by the words she reads on the book. Just imagine how happy she is when the words come into reality and told by the person she loves.

3. She Never Judge Everything Quickly

Someone who loves to read has met thousand character with different personality. Sometimes there are time when the villain turns out to be the protagonist. That is why she never see the world as black and white. She will openly accept a new and unusual view. Rather than making a judgement quickly, a girl who reads would thoroughly studying the whole situation and try to be understanding.

4. It Is Not Hard To Buy Them Gift

A girl who love to read is probably the simplest girl ever exist on earth. If you sometimes have to think hard of what to get for a gift for your girlfriend, those kind of situation would never likely be happened if you date someone who reads. The kind of gift they like is very easy. What else could be? Of course she would like to have some new best selling books, or a rare and vintage book to add to her collection. You don't have to spend a lot of time or having a headache because of the gift. But you probably have to prepare some extra cash.

5. She Is A Good Listener

A person who is talking too much can sometimes be annoying. Moreover if she cuts into your words and barely gives you chance to speak. And sometimes all you need is just to be listened without being judge. If your girlfriend loves to read, she would also be a good listener too.

As she can stay silence for hours (even days) when reading through the pages she read, she will also willingly hear your story. A reader is a good listener. Everything you share with them, she will never think any of it as boring. She will thoroughly hear every single words you said.

6. She Doesn't Care Much About Physical Appearance

Let's be honest. Girls nowadays are so into make up that they don't mind spending a lot of money on them. As for a man, most of them still think that natural appearance is way prettier than one covered in a thick and heavy make up. If you think so, then a reader girl is someone perfectly match your taste.

Rather than spending time and money for make up, she loves to buy books instead. She doesn't really care much about outer appearance as she busy developing their minds. It doesn't mean she doesn't care about her appearance, she just never overdone it. This somehow appealing for some man that he falls in love with her.

7. She Will Give You Some Time For Your Own

As much as she loves to read, she understand that everyone need some time of their own. She wouldn't mind it when you tell her that you need some time alone to meet your friends and hanging out with them. She will perfectly know that you really need it. So rather than clinging on to you all the times, she will gives you your own time, and she will have her own as well. She is so good and spending some spare time, remember?

8. She Have A Large Stock Of Conversation Topics

You probably afraid that you might be awkward and there will be some silent times when you just started dating. Shut out all the worries when the one you date loves to read. She will never runs out of topics. Instead, she has a large stocks to begin with. There would never be any silent moment because she always know what to brought up. You will find a lot of new things as you engaged in a deeper conversation with her.

Her broad knowledge of so many things will never brought your conversation into an end. But don't judge too quick, she may be has a lot to talk, but she would stay silence and listen to you when you need her to. Endless conversation is her way to get rid of awkwardness.

10. She Has A Big Curiosity

A reader would never be satisfied just by one story. She will always crave for more and more. Yes, her curiosity is beyond what you can imagine. But hey, it's good in some way. She will always try to find out anything about you, and understanding you. Her curiosity towards you is how she express their love. If you have become her new target of curiosity, be happy because she loves you as much as she loves her books.

11. She Make A Good Storyteller

Do you know what do the kids like the most during bedtime? Of course it's the bedtime stories. Psychologists say that bedtime stories are good to improve a kid's memory. Well, who will make a good storyteller better than a girl who loves to read? She will tell a story in a most interesting way possible. She will exactly knows how a villain talk and express how a fairy godmother do the magic. Not only the kids, but you will also interested every time she told a story!

12. She Hardly Gets Bored

For most people, having nothing to do always resulted to a boredom. But it being bored is something uncommon for a reader. As long as there is a chair and a book, time would become leisure for her. She knows how to entertain herself and spending her lone time.

13. She Is Rich In Knowledge

With a reader, never afraid to talk about anything. Even if she is not familiar with the topic, she surely will say, "I have read it somewhere," and both of you will not lost the connection. Because of the intensity of her reading, she become rich in knowledge and it make her look very smart.

14. She Also Has A Good Memory

How could a girl who reads easily lost a memory? Just by listening how good she retells the story of the book she read and explaining the characters in details, you know that she is good at remember things. Your birthday, your favorite drink, your first date, and even your mom's birthday, she will store all of them in her head.

15. She Is Definitely Not A Quitter

16. She Appreciate Every Little Things

As said before, a reader is someone who is simple and easy to please. Because of the number of books and stories she has read, she become more and more appreciate towards little things. She would be thankful because of your presence and she probably wouldn't ask for more.

More Reasons Bookworms Are The Best People To Love

Indeed, here are more reasons why should date a girl who reads:

Well, to date and not to date a girl who reads is clearly a preference, but its always nice to date someone different than most of girl nowadays. Thus, you find out the reasons why you should date a girl who reads because she is the hottest. Her reading hobby shaped her attitude and personality into a good one, and you eventually wish her to be your girlfriend.

Michelle Devani
My name is Michelle Devani, and I've been helping people with their relationships since 2003. In 2017 I decided it was about time I started a blog on the topic, and since then more than 2 million people worldwide have read my relationship advice. Drop me a comment below to let me know what you think.
You May Also Like
How to Make a Gemini Man Loves You Forever and Ever
No Comments
How to Tell Your Boyfriend That He's a Bad Kisser without Offending Him
No Comments
How To Make A Leo Woman Fall In Love With A Scorpio Man?
No Comments