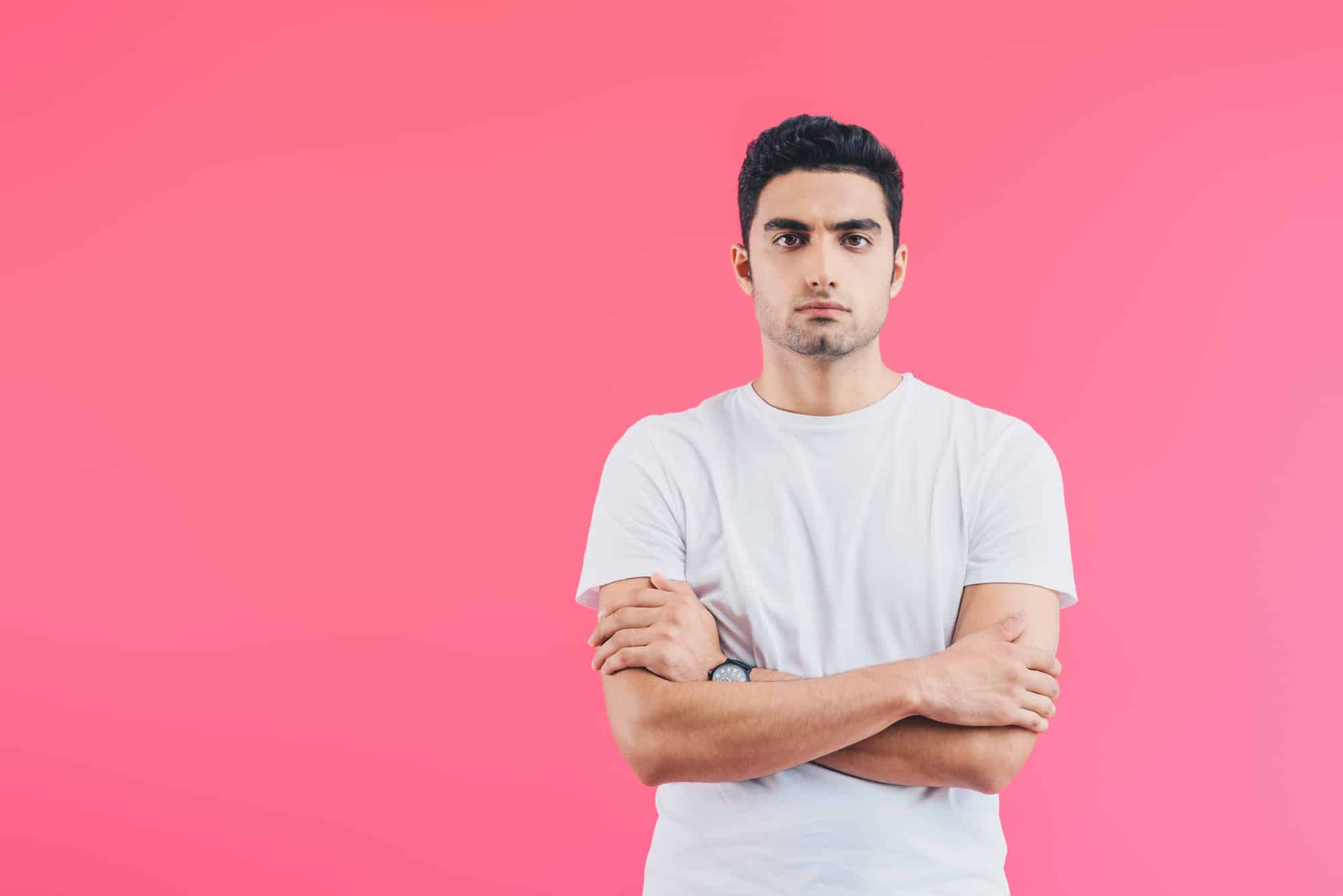 Undeniable Signs He Is Player (#1 Girls Alerts To Know)

You're being in a relationship with a guy. Everything seems to be okay between you and him. But you feel like your relationship is going nowhere. You don't feel the chemistry when you're with him. It's going okay at the first moment you two getting together, but as time goes by, you spot some odds that make you wonder if you and he aren't true love material.

If you're wondering why your relationship isn't having the sparks and you're afraid that he's only using you, these Signs He is Player will give you clues that your boyfriend is probably playing with your heart.

1. He Won't Let You Check His Phone

Every time there's a notification comes to his phone, it can be new messages, new chats, new e-mails, or any other stuff, and he's unable to reach his phone, he doesn't ask for your help to check it out. He's in another room, away from his phone, then both of you hear a notification comes, he knows you're closer to his phone, but he doesn't ask you to check it. It's clear that he doesn't feel like letting you know who he's been keeping in touch with. He's probably been communicating with another person intensely. If there's nothing to keep a secret about, so why doesn't he let you check his phone while he can't reach his phone?

2. He Takes You To The Same Old Spot

Another sign that makes you suspect that your boyfriend is a player, is that he takes you to the same old spot to hang out. He takes to you to the same restaurant as there's no other place to choose from. It's not like it's his favorite restaurant, but it may be because he takes somebody else to another restaurant. It's more like he keeps a secret that he doesn't want anyone to make you know.

The scene is probably like this, he takes you to restaurant #1, and he takes somebody else to restaurant #2. People at the two different restaurants will notice that your boyfriend only takes one girl. But, the truth is probably one girl one restaurant. Sounds creepy to you? Well, you need to look at the other signs to make it clear that he is a player. Don't panic yet, girls.

3. He Doesn't Warn You Of Your Bad Habit

Everybody has a bad habit. Some people are so messy, they throw stuff everywhere in the room. Some people have bad time management, they always come late to any event. You have a bad habit of not putting the dishes in the sink. You leave them on the table cause you're too lazy to wash the dishes. Your boyfriend knows that but he doesn't warn you to change your habit. He doesn't seem to think it's a bad thing and he doesn't have the urge to remind you to be better.

Actually, it can be a bad thing if you keep doing your bad habit. Sooner or later you will be a mother. A mother has a big responsibility for the hygiene of her house. If he doesn't warn you of your bad habit for your good sake, there are chances that he doesn't think you can be the one in his future life. It's getting clearer that you're not the only one in his life.

4. He Doesn't Always Call You First

When you two are apart, it's you who makes a call. He claims that he doesn't want to bother you, so he let you be the first to call. Doesn't it feel like he doesn't want to know how you are as soon as possible? He only wants to have a call when you call him first. He's not that excited to know how your day was. That's probably okay if it only takes a few times. But, what if you don't call for too long, and he still doesn't call first? He's probably having another one to call first.

5. He Doesn't Complain When You're Too Busy

You have plenty of things to do that make you lack time to hang out with him. You're busy doing your college assignment or running a business. He's okay with that, saying that you should go for something that's important for you. It may sound good that he doesn't want to let himself get in your way. But, the more you let yourself to your own business, then he doesn't seem to feel like you're way too busy. This may improve your suspicion that your boyfriend has another thing. Another thing or another one that pulls his attention when you're not around.

6. He Doesn't Let You Come To His Workplace

You two work in different places. It's time for lunch and you want to have lunch together with him, so you ask him if you can come to his workplace. Instead of letting you come, he asks you to meet at another place. He doesn't let you come to where he works. He doesn't give a relevant reason why. This should make you suspect something weird. Why not let you come to his workplace? Like there's something or someone he doesn't want you to meet. Do we smell an affair here? Our suspicion seems to grow bigger. Before we can make a conclusion, we should check the other signs.

7. He Doesn't Notice When You Change Your Appearances

As a girl, you want to look the best. You cut your hair or dye them with different colors. You want to look pretty in front of people and look prettiest in front of your boyfriend. There's a time that you cut your hair a little shorter. Then you meet your boyfriend, but he doesn't notice that you get a haircut. This might be less important, but if he really cares about you, he should know every single change that happens to you.

But, isn't it good when a boyfriend notice the change in his girlfriend's appearance and compliment her about how she looks? You wish you could impress your boyfriend because of your new look, but turn out he doesn't notice it until you tell him. Seems like you're losing the chemistry between you and him. Or, is it because you're just another girl for him?

8. He Stays Away When He Gets A Call

When you two are hanging out together to have lunch, going to movies, or going shopping, then he gets a call. He doesn't pick that right away, but he needs an excuse to move away while picking up the call. He even hides his words and his expression while he speaks on the phone. This sign must be the strongest clue that he's been communicating with someone that he keeps a secret from you. If this doesn't make you suspect him of having another affair, you should ask yourself. Are you and him in a relationship or a friendship? It's like there's more secret between the two of you than in the White House.

9. He Often Gets Reasons Not To See You

You ask him to come to your place, and he says he got work to do. On the other day, you ask him out to go to the movies, but his friends need him for a business. He always finds reasons why he can't come to see you. If it happens once, then it can happen twice. He always finds another reason, but the reasons are getting more irrelevant time after time. You two are dating, but it feels like you're not.

He doesn't seem to put you on his priority. He doesn't try to make time with you. And the worse is, he doesn't seem to miss you when you two don't meet. Not seeing you isn't a matter for him. This is a sign that there might be something else that got his attention.

10. He Doesn't Remember The Details About You

You and he are in a relationship, but he barely knows some details about you. He doesn't remember your shoe size, your birthday, your high school name, and your favorite singers. A person who wants to have someone in their life must know every detail about them. It may be the simple and less important things, but for those people who are really in love, every little thing about their loved one does really matter to them.

So, if your boyfriend doesn't remember the details about you, it means that you don't matter to him. To him, you're just another girl to fool around with.

The clearest sign that your boyfriend only fools around with you is when you ask him about what he's gonna do next. When he describes his plan, you can't see if you're in it. Seem like he doesn't see you somewhere in his future image.

Thus, here are more alert for girls to identity signs he is a player:

Those are Signs He is a Player that you need to know if your boyfriend is only taking advantage of you. He doesn't really want to be in your life nor want you to be in his life. To him, you're just another girl that he can have fun with and then throw you when he finds another better girl. If you catch your boyfriend showing these signs, you should ask yourself is it worth it to keep your relationship. You have to be brave to take an action.

Don't let yourself be fooled by a guy. Don't waste your time on the one who doesn't want to make time for you. Get yourself a person who will cherish you, care about you, accept your flaws, admire your kindness, and will fight for you. You deserve the love that comes from sincerity, not just a temporary lust.

Michelle Devani
My name is Michelle Devani, and I've been helping people with their relationships since 2003. In 2017 I decided it was about time I started a blog on the topic, and since then more than 2 million people worldwide have read my relationship advice. Drop me a comment below to let me know what you think.
You May Also Like
Laws of Cheating in Islamic Marriage That You Need to Know
No Comments
How to Stop Feeling Guilty about Cheating On My Boyfriend
No Comments
18 Unseen Signs Your Wife Knows You're Cheating
No Comments