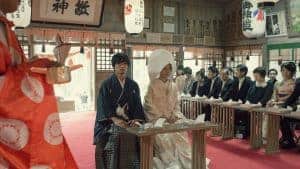 Shinto Wedding became a popular traditional wedding in Japan after the marriage between Prince Yoshihito and Princess Kujo Sadako. The marriage was held back at the Imperial Palace in 1900s. After that, the Japanese shrines started to hold similar ceremony in Tokyo. The wedding ceremony became more and more popular after being held in other cities like Osaka and Kyoto. Actually, the wedding ceremony had first started in early 1872. But then it was held without any preference to a certain religion. The purpose of the ceremony at the time was solely to protect the bride.

The Ceremony of Japanese Wedding

The traditional wedding ceremony was guided by a priest, and first of all is the Shinzen kekkon. It was a purification ritual in Shinto that incorporate the exchange of sake before married between bride and groom. Food items were left at the wedding altar as well as the wedding ring. The couples stood in the center of the room, while family members stand behind a table containing sake and fruits. The initial ceremony took 20 to 30 minutes to complete.

After the completion of the purification, the priest then announced the beginning of the san san ku do, literally "three-three-nine-times". It reflected the three oaths taken three times, represented by three cups, poured three times, swallowed after three sips. The three cups usually had increasing size. First and smallest cup was poured to the groom, whom drink from it before offering to to the bride. Second and middle-sized cup was poured to the bride, then to the groom. While the last and largest pour was come to the groom then the bride (repeating the first cup).

After drinking, the next step in the traditional wedding in Japan is the vow reading. The groom and bride would approach the altar. The groom then read his vows for three times while the bride listened.

Japan had a long history of a matchmaker or "Nakodo". The Nakodo usually set up the meeting between couples and they eventually get married. In the wedding ceremony, the bride and groom had their chance to thank their Nakodo in the vows. But if there was no Nakodo, the closest person to the couple would fill the place as best man or bridesmaid.

In the final step of the ceremony, the priest offered Japanese evergreen to the altar as a reflection of gratitude to the spirits who blessed the couple. Bride and groom would follow with their own offering as well as the family representative from both sides (usually the fathers). After that, the wedding ring was presented.

Traditional wedding wardrobe in Japan was quite fascinating. Most of the time, the wedding costumes was white, represents the country's flag which consist of big part of white with some red color.

Those are the unique facts about traditional wedding in Japan. Wedding customs were usually driven from the culture and religion of the society. The traditional wedding itself often reflect the beliefs of the ceremony holder, in the hope of a bright future and the marriage life to come would be full of wealth and blessings.

Michelle Devani
My name is Michelle Devani, and I've been helping people with their relationships since 2003. In 2017 I decided it was about time I started a blog on the topic, and since then more than 2 million people worldwide have read my relationship advice. Drop me a comment below to let me know what you think.
You May Also Like
Crucial Things to Consider Before Getting Married to a Christian
No Comments
All the Things to Know Before Marrying a Military Man
No Comments
How To Let Your Boyfriend Know You Are Ready For Marriage
No Comments