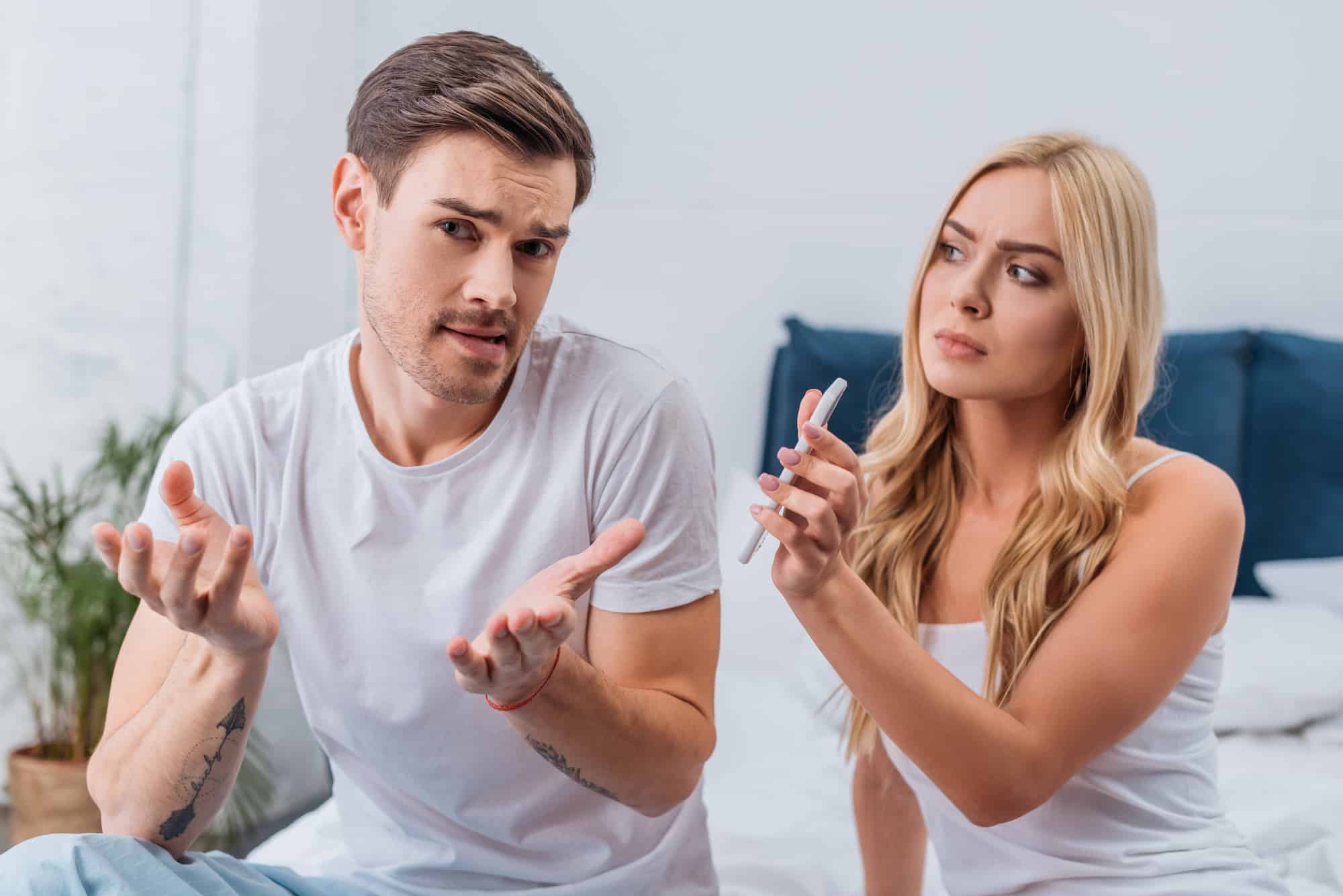 Maybe he is being sneaky and suspicious. Or does he just have a busy schedule? It’s hard to differentiate an act of your lover when you don’t know the signs of a cheater guy.

Cheating is a real deal breaker in every relationship. It’s a sign of distrust and unloyalty. It is one of the start of a wobbly, destructive relationship that will end very soon. But sometimes our partner can be very sneaky when they are cheating. Well there are some sure signs that can conclude that his suspicious acts are in fact the signs of cheating. Match these signs of a cheater guy to your couple’s behavior and start acting on it before you got even more blindsided!

You may also read: Signs He’s Cheating In A Long Distance Relationship

1. His Mood Swings A Lot

When you are on the edge all the time because of cheating, it’s common to always be sensitive when you sense that your partner suspects you of cheating. He has been alert every time you are around him. So whenever you make a simple joke, get a little mad or do something you usually do, he will respond with a weird emotion. If this is not typical of him, start digging deeper!

What's the second signs of a cheater guy? A new girlfriend can make a guy daydream and fantasize a lot. That makes it harder for him to be with you in real life. To put this on a test, try to ask some specific question about the day you’ve spent together. For example, ask the specific scene in a movie you both just watched. If he is cheating, he will be more prone to being confused and lying.

3. He Changes His Appearance Drastically

In a new relationship, we usually dress up better and put on our best when going out together. If you see him changing his appearance, whether it is losing some weight or changing his whole wardrobe for no apparent reason, there is a chance that he is cheating. He does this because he is smitten with his new girlfriend and he wants to be handsome for her.

4. He Has A New Specific Friend

Guys usually are not very creative in making up excuses, especially when they are hiding such a big secret. When they feel cornered by our otherwise casual question, he will stutter and say that he have a friend. This friend will pop up in every excuses but you will never be introduced to this friend or know anything more about this friend. So if he suddenly have a mysterious special friend, maybe you need to dig up more information about this friend.

5. He Suddenly Needs To Be More Private

It’s hard to divide the time when a guy’s heart is in two places. When a guy is cheating, suddenly you won’t be his priority anymore and he will have less and less time for you. He will demand more privacy by going to the room by himself and being mad when you don’t respect his privacy.This happens because he is pourin all his mind and heart to his new girlfriend. If he does this, do one thing that is right, dump him.

6. He Have More Work

Out of nowhere he have tons of work opportunities. These work opportunities will make him come home late or go out of town for a long time. He will try to make it casual but there is a hidden meaning behind these sudden work mania. ‘work’ is the most common excuse guys make so they can have some time with their new girlfriend. When you always hear ‘work’ as an excuse, it might be time to recheck his loyalty in this relationship. Well, if you found this signs of a cheater guy on him, you gotta get him off girl!

7. He Secure His Phone More Than Needed

Phone is the number one media of communication for every couple. Therefore it is the number one key to look at every detail you need to know about the cheater and his girlfriend. Because phone is such an important key to keeping it a secret, a guy will do anything to protect his phone.

He will bring it to the bathroom with him, he will put a new lock on it, he will put it on airplane mode all the time. This is because he don’t want you to see the content. So if he is suddenly madly connected to his phone, it’s probably time to reevaluate your relationship with him.

8. His Phone Dies A Lot Of Times

It is normal for every couple to call each other in the middle of the day. This is just a form of connection and affection. If suddenly you call him in the middle of the day and he never picks up, ask him what is wrong. If he is a cheater, he will make up silly excuses, including saying that his phone is out of battery. This excuse will pop up all the time and it will make you feel really suspicious. Well, follow that feeling and unwrap all the lies.

9. He Says That You’re The Source Of The Problem

Just when you are starting to dig up some things about this mystery girl, suddenly a heat rise up. Maybe you try to ask for his explanation on these things or he caught you seeing it. Nonetheless, you will be mad and he will be really protective. A guy who is not cheating will not feel ambushed.

They will explain slowly and with love until you are on the same page with him. But if he is cheating he will be really protective. He will even make it seem like all of these problem is because of you. This is a form of his anxiety and fright. Fight back, try to dig up more information.

New relationships demand a lot of time together and a lot of affection. Sometimes that comes in the form of material things and luxurious dates. Before he cheated, his financial bills might be an open subject and he have no reason to hide it from you. But now, he hides every single thing that can link him to his new girlfriend.

11. He Doesn't Think Of A Future With You

A cheater will never think about the future. He will always be anchored to the present or the past. When you ask about the future in your relationship with him, he will feel anxious. He will brush it off and not talk about it. This is because he is busy hiding a relationship from you and maybe he does not even want a future with you guys. So be a brave person and end the relationship!

These signs individually might not be a sure sign that he is cheating. Maybe it’s just a rocky phase in your relationship. But if you’ve matched his behavior to his daily actions and it turns out that you’ve matched more than one of the signs, there is a very big chance that he is cheating. Especially if he have the combination of more than five of these signs of a cheater guy.

More Signs That He Is A Cheater

Here are more signs of a cheater guy that you need to figure out so you would not end up dating the wrong guy.

Well, we hope you don't found the signs of a cheater guy on your boyfriend. But if you do, let's find out how to put him into.

1. How To Unmask A Cheater

These signs may tell you enough things, but it will not get you to the finish line. To know that he is a cheater you need to know how to unmask the cheater by using some steps that will make you know who he and his mystery girl really are:

2. Get Into His Phone

This is the number one port to every secret you need to know. Make time to crack the passcode if he have one. If not, dive straight in. Text his messages first and see if he have been chatting with an unfamiliar number for a long time. Then, check his photos. If you see some girls that pops up in numerous photo it is probably her. Try to transfer her contact to your photo, that is your safety net, and you can decide what to do with that later

This might be some weird detective move but believe me, this is effective. You can know that he is cheating if he is not in the place he told you he is or if he have been to some weird places in weird times. If you want to, follow that GPS and find out the truth about what happens.

His friends are probably also covering the lies. So when you ask his friends they will probably tell different lies about the same situation. If they do this, push them, corner them, they will eventually tell you the truth, whether they like it or not.

When confronting with a cheater, most girls usually take the easy and messy way by spending time trying to prove that her boyfriend is cheating by using fancy ways. But by simply contacting the cheater, it will be an easy way out. Sure, it might be unorthodox.

Nonetheless, i assure you this is the classy way out. First, take her contact from his phone or from his notebook. Also make sure you know the face of this girl. Then, contact her or arrange to meet her but don’t say that this is about a guy. Then, talk to her. Usually these girls don’t even know that they are cheated on. In this case, you can plan a way to get back to the cheater. But if she already knows, then it’s time to confront him by calling or talking to him in person

Now that you’ve had the ultimate guide when it comes to cheaters, you can stay alert and smart when you encounter these guys in your life. Well, you girl are beautiful and deserve to stay with a loyal hot guy.

Michelle Devani
My name is Michelle Devani, and I've been helping people with their relationships since 2003. In 2017 I decided it was about time I started a blog on the topic, and since then more than 2 million people worldwide have read my relationship advice. Drop me a comment below to let me know what you think.
You May Also Like
Sneaky Ways To Catch Your Girlfriend Cheating
No Comments
If Your Boyfriend Flirts With Another Girl, Is It Cheating?
No Comments
Heartbreaking Signs Your Husband Is Cheating With Your Friend
No Comments