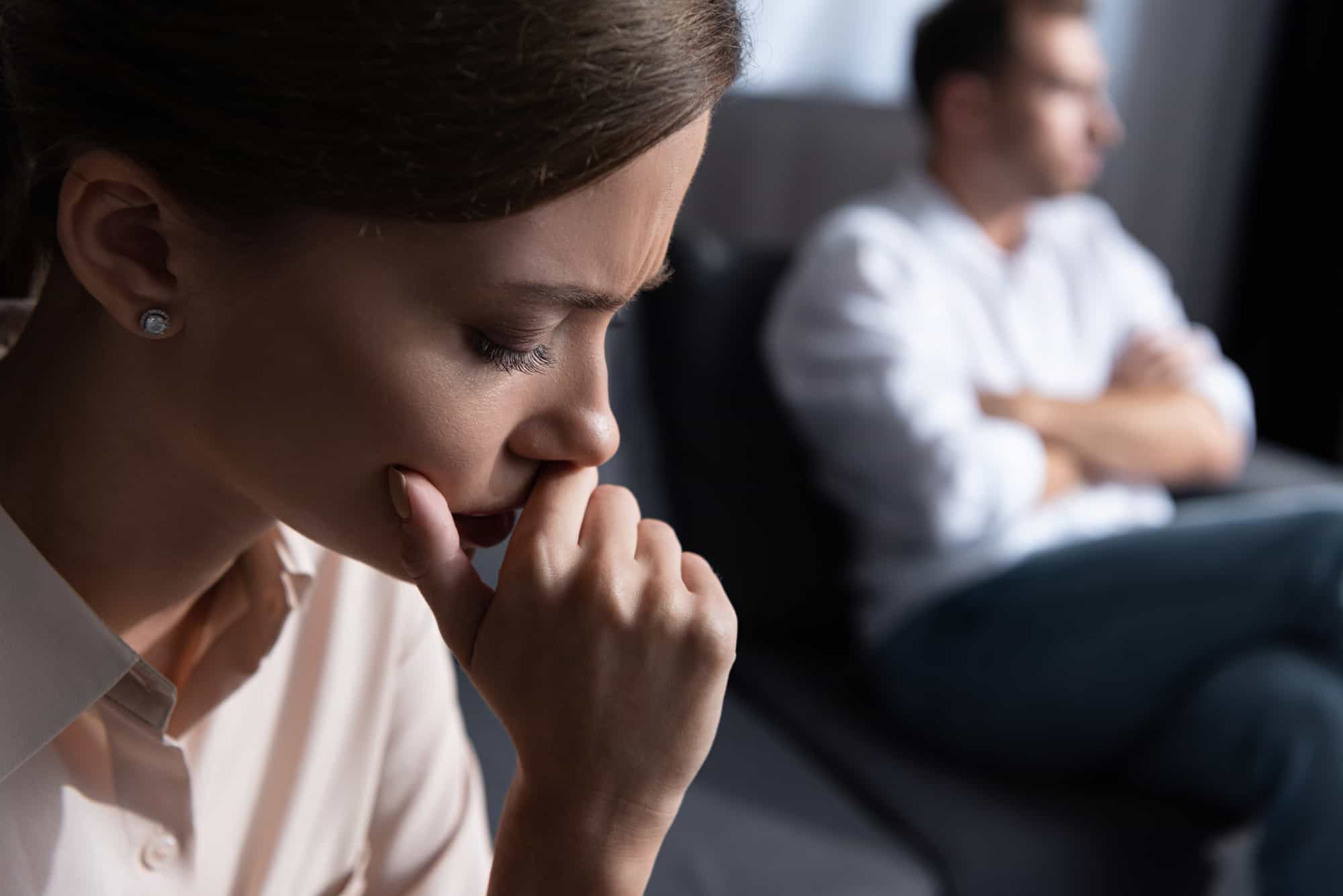 Signs He Has Given Up On The Relationship With You

Strong relationship are built in the name of love. The basic of the commitment in a relationship is the affection between two people in love. To keep the relationship going, two people need to trust each other and accept both the perfection and imperfection of their pair. The communication is the important thing to avoid the misunderstanding that can lead to conflicts. Nobody wants their relationship to come apart. They will do anything they can to save their relationship cause it's not easy to lose the love that they've been needing. The struggle of finding love is not something that can be easily thrown. Somehow, failing in a relationship can be more hurtful than getting rejected. It hurts how the trust, the loyalty, the attention has to go to waste.

Being in a relationship is something you've been dreaming. To keep your relationship last, you try your best to make your partner comfortable and do whatever to please him. Since he has chosen you as his love partner, he wants to put you as priority and give you anything you deserve.

As time goes by, you two meet some problems that trigger the conflicts. You two has been struggling to make the relationship survive but it' just useless. The struggle to make things up is so exhausting and your relationship is coming to an end. It worries you that he has got enough of you and chooses to give up the relationship. Learn his attitude if he has shown the signs he has given up on the relationship with you.

1. He Doesn't Try To Explain Anything

When a man and a woman are in a relationship, at some points they will encounter problems along the road. The problems can result from the different visions, different backgrounds, misunderstanding, or getting fed-up of each other. Getting in fight is something usual in a relationship where they can learn about the other selves better. To save the relationship from falling apart, a good communication will help find a way out of the problem.

In your relationship, you and him can't avoid having arguments. It's actually normal since everyone has their own principle. You two need to conform yourself and accept each other. Talking and explaining about the problem will make things clear between the two of you. If you and him are in fight because you think he made a mistake but he doesn't try to explain something, it's a sign that he has given up on the relationship you two has built.

2. He Doesn't Want To Hear Anything From You

When it's you that he thought has made a mistake, you want him know what's actually going on. You want him to understand what you're trying to say, but he doesn't want to listen. All the words you say are just useless cause he just doesn't want to hear anything from you. If there is no word can make things right, it's clear that he doesn't hope to find the way to get out of the problem that causes the fight. Well, that's the second worst signs he has given up on the relationship with you

3. He Prefers To Be Quiet

He doesn't want to talk about it nor listen to you. There is nothing he does to make things okay. The only thing he wants to do is stay quiet and leave the problem behind without any solution. If he let the problem undone, there is no denying that he has given up on the relationship. Anyway, he doesn't try to do something to make this relationship survive.

4. He Leaves Without A Word

Since the words can't speak, the silence takes the wheel. Sometimes it's easier to just walk away from the problem. If that's what he does when you two are having trouble in the relationship, he must have given up on the relationship. He feels that it's much better to leave you behind without any word.

5. He Looks For Fun Somewhere Else

Leaving you seems to make him free to go wherever he wants. He's free to go looking for something makes him feel better. The tension has made him depressed and he needs air. Walking away from the problem is something anyone would do when they get frustrated and lose their hope to make things up.

6. He Hangs Out With Some Other Girls

If boys' problem are how their girls can't seem to be the one they need, they'll go looking for another girls. They will give it a try with the other girls who can treat them better than their girlfriends can. If you catch your boyfriend hanging out with some other girls, especially if those girls are nothing like you, he's definitely has given up on you.

Being in a struggling relationship has given him such pressure. He needs some space for himself. When you see that he has loosen the connection between you and him, it means he wants you two to give each other space.

Also read: Signs That Your Ex Girlfriend Misses You -How to Know When People Are Lying

8. He Has Fun With The Guys

Sometimes guys need to have some fun with the guys and forget about the girls for a while. Going out with the guys will bring no drama. There is no doubt if he hass given up on the relationship with you when he finds himself better when he's out with the guys.

9. He Doesn't Care About You Anymore

Ever since he makes a distance between you and him, he barely concerns about what's going on in you. He doesn't care if you're achieveing something good or making mistakes.

10. He Looks Better Without You

11. He Gets Busy With Other Things

You're no longer someone that matters to him since he decides to moves away. He finds his way to the other things that can make him busy. That way, there'll be no space for you in his mind and heart. It's heratbreaking, indeed, to know that you're not what he makes time for.

12. He Doesn't Miss What You Two Had Before

Want to know more signs he has given up on the relationship with you? As lovers, you two have shared many things and have gone through a lot. It's not that easy for you to accept the truth that those thing you had with him are left with memories. You can't help that you miss those times when you and him were still okay. You wish that he somehow misses that too, but it turns out that it's only you who can't seem to accept the reality that he gave you up.

There's always a way out to every problem. If there's a way in, there's a way out. The problem between you and him is not an impossible thing to solve if both of you want to give it a try. Remember that you two are in this together. So, whatever happens in your relationship, you two should try hand in hand to find a way to make things work. You tell him that you want to find a way out of the problems, but he refuses to do something about it. You may be disappointed that it's getting clearer that he has given up on the relationship.

14. He Puts No Effort To Get Things Back

Every things has fallen apart and it's never what you expected it to be. Things were much better in the past cause tomorrow is never promising. Your dream to have this relationship last forever has been gone. Even if there's still a hope to get things back to the way it used to be, he just doesn't take the chance. You should open your eyes cause if he doesn't want to try the way you want to, then there's no hope left to you and him. What's the point of trying hard alone?

More Signs He Wants To Leave

You think what happens to you and him is what leads to a break up, but actually, it's worse to him. If he does these things, he's not just giving up on a relationship of you and him, but he's also losing faith on lovers things. Here are more signs he has given up on the relationship with you:

Those are signs he has given up on the relationship with you that you should know about your love partner. Getting into relationship and then breaking up is normal, since people are trying to find the right person among many people. They try to see if the one they're interested in is really the one by getting closer to them in a relationship. If turns out, that the love between them are temporary, breaking up is something they can't avoid. When your boyfriend has given up on the relationship, you should understand him and try not to force him to do something. Give him a space to think. Nobody wishes to fail in a relationship, cause it's not easy to find a new love.

Michelle Devani
My name is Michelle Devani, and I've been helping people with their relationships since 2003. In 2017 I decided it was about time I started a blog on the topic, and since then more than 2 million people worldwide have read my relationship advice. Drop me a comment below to let me know what you think.
You May Also Like
5 Dating Mistakes That You Should Stop Before You Start New Relationship
No Comments
How to Win Cancer Girl Heart and Take Her on A Date
No Comments
What Is Wrong with Me If I Am Still in Love with My Ex Two Years After Our Breakup?
No Comments